And Just like THAT, Mother Lode West Hollywood is Finally Open

Established in 1979, Mother Lode West Hollywood, located at 8944 Santa Monica Boulevard, had some major repairs to its infrastructure, but its overall aesthetic remains the same. The roof was wide open at one point and completely redone. Upgrades were done to the lighting and sound system, and the pool table has been removed to open the space and make room for a dance area. The brass throughout the watering hole is also shiny and newly polished.

However, the big repairs that everyone seems to be interested in is the remodeling of the restrooms in the back. Bar patrons were torn between thinking the bathrooms were disgusting and in dire need of an overhaul, while we hear others liked them scuzzy because it’s what gives Mother Lode its dive bar charms.

Like it or not, the restrooms are new, but not that different. The metallic finishes and fresh paint give it a more modern feel. A new trough has been installed, but the urinal has a divider so there is more privacy when people are standing by the doorway. 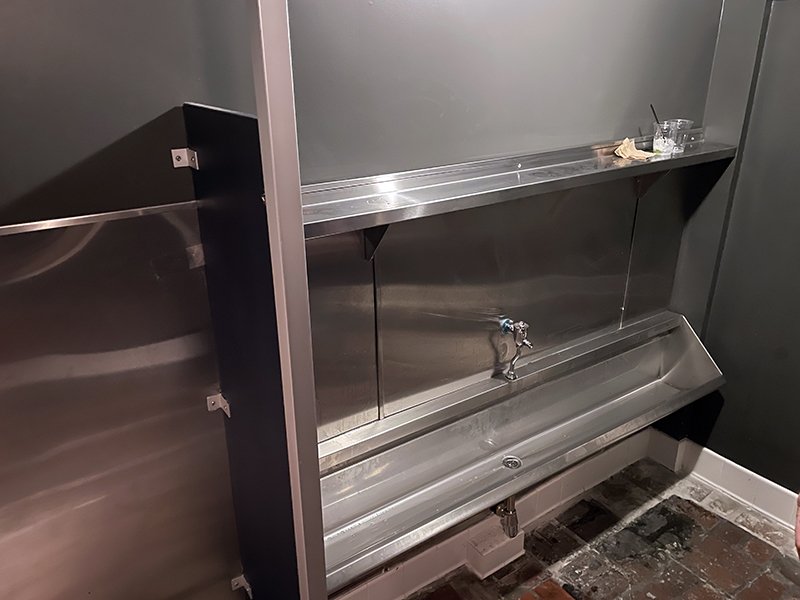 The bar posted a Now Hiring sign on its storefront in October of last year, which sparked rumors that it would open for Halloween weekend. An employee revealed at the time that the goal was to open for Halloween weekend, but if not, then shortly after. Yet four months later the bar remains closed as it continues with renovations and other preparations. We can confirm that  had a final building inspection last Friday, January 28, 2022.

DJ Grant Smith revealed the bar was getting its finishing touches in preparation of the grand re-opening on Super Bowl weekend.

The bar opened to waves of large crowds throughout the evening. Patrons were asked to wear a mask before entering the bar and were told they could remove the masks once they ordered their drinks. Security also asked for proof of a COVID-19 vaccination.

According to their social media, Mother Lode West Hollywood is open Monday through Sunday from 3 p.m., to 2 a.m.

It literally just looks a little cleaner in there, but not much has changed. The bathroom is still a dump. Yes, cleaner, but should have been gutted and redone. The new vinyl wood floor on the upper level is a mystery to me. Does not even try to mimic the rest of the wood in the entire bar. Not sure why they only had one bartender working the entire lower bar on Super Bowl Sunday. It was a bit crazy. New sound system??? They have the same absurdly large speakers on the upper level on the floor, that rattle the… Read more »

Will go there this weekend. Of course, most of the guys would not yet have been born when I first walked in. Summer of ’78 and the bar was then called Rascals. Different interior, more like a “Fern bar”. Still, a lot of fond memories.

Fishnet shirts are SO, well, NEVER. Did any of the former bar staff return? Mark, Doug, what’s his name and what’s her name.

I’m so happy ML is back!!! I was there yesterday evening . Love that sound system, but please put back the pool table.

Thrilled to have it back. But put back the pool table, drop the fancy lights and new sound system. We just need our neighborhood bar. Nothing fancy. Thanks.

It is not more fancy, don’t worry.