It appears the Alta Cienega Motel, located at 1005 N. La Cienega Boulevard is closed and up for lease. Real estate site LoopNet.com describes the motel known for its Jim Morrison Room, as a rare hospitality opportunity in the heart of West Hollywood. The 5,591 square foot property was listed on the website on May 3, 2021.

The motel also appears on bizzbuysell.com. According to that website, the asking lease price is $75,000.

The business description is as follows:
Unrivaled opportunity to Lease in the best submarket of Los Angeles. Independent motel opportunity in high barrier to entry West Hollywood, CA – best submarket in the Los Angeles county. Conveniently located near several bars and restaurants on The Sunset Strip and Santa Monica Boulevard. Legendary rock singer Jim Morrison lived at Alta Cienega Motel in Room 32 from 1968 to 1970.

Significant upside with the right operator and investment.
Notes:
– This listing is on behalf of the owner of the real estate.
– Real estate is for lease, not for sale.
– Offers due by June 15, 2021.
– Site tours only to qualified and experienced operators.
– Can be provided in as-is condition, or fully remodeled. Rent and length of term negotiable.
– Landlord does not have financials for previous operator.
– Manager’s quarters included in the 24-room count. 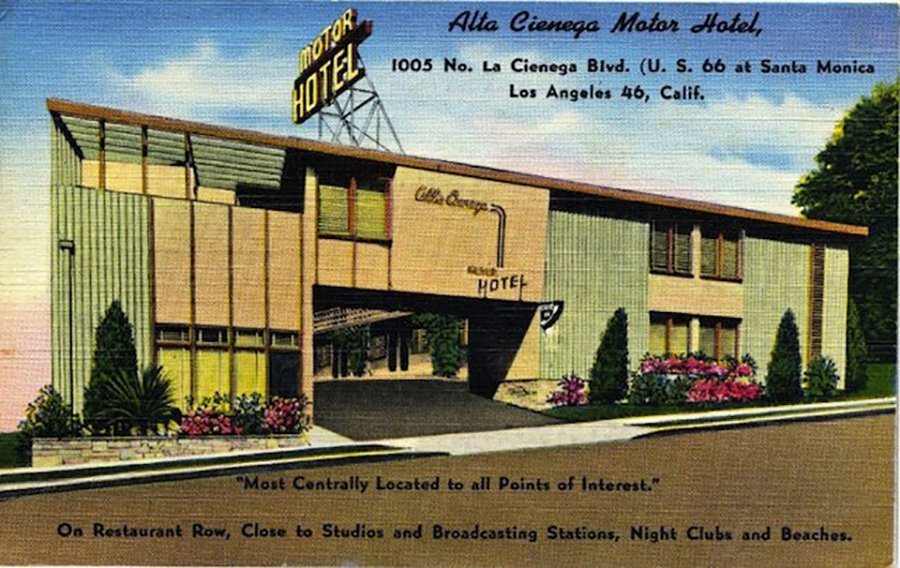 Jim Morrison is reported to have stayed in room 32, located on the second floor facing La Cienega Boulevard. The Lizard King is believed to have lived at the motel while he was recording L.A. Woman just walking distance, at 8512 Santa Monica Boulevard. According to a plaque on the current building of the former recording studio (which is also up for lease), it was known as The Doors Workshop in 1970.

Atlas Obscura reports that after Morrison’s death in 1971, the public took charge and made the Jim Morrison Room their personal shrine to the frontman, commemorating him with decades of graffiti.  No surface in the room is without lines of poetry from Jim’s journals, Doors’ lyrics, personal messages, and insane drawings. The TV, the showerhead, the inside of drawers, and the air conditioner—they all bear messages from mourning Doors fans, some as old as 1971 and others added as recently as the last day the motel was open, which was probably sometime before the COVID pandemic shut it down. 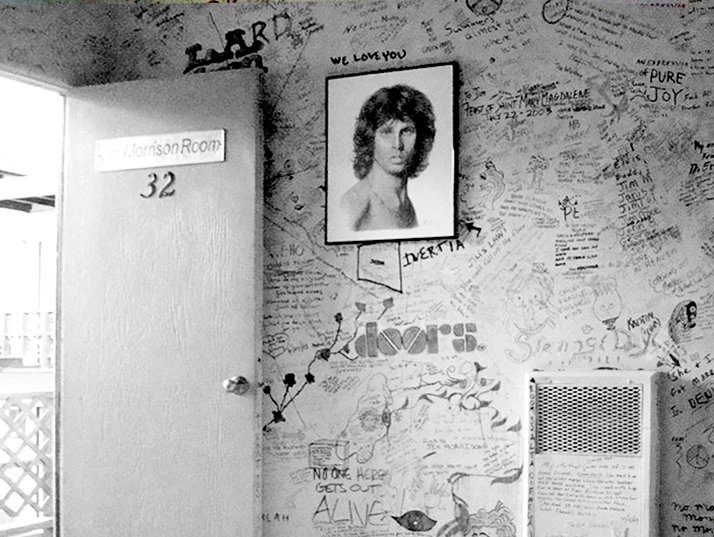 The motel cashed in on the room over the years, charging anywhere from $70 to $160 to spend the night in the shrine, reports Atlas Obscura. Guest had he option of visiting the room for a dollar a minute. To commemorate the occasion, you could purchase a keychain on your way out for $10. The room is musty and grimy, with paper thin walls and few amenities, all the better to channel the ghosts of rock and roll history.

Alta Cienega Motel is currently gated. Their phone has been disconnected and there is a sign on the side of the building that says the space is closed to the public. A van inside the parking lot suggests there are some repairs being made, but for now the space is completely empty.

The Standard Hotel closed on Sunset Boulevard at the end of January of this year due to the COVID pandemic. It is unclear when the Alta Cienega Motel closed, or why. According to their official Facebook page guests posted that the checked into the hotel as late as March of this year.

The future of the old motel is not yet known. It also unknown whether whoever acquires the business will preserve the Jim Morrison Room in all it’s filthy, graffitied glory.

The original rendering looks beautiful in that old postcard. The wall they put when they built the building next door kills it. The city should lease it and use it for lower income housing.

Did the psychic predict this??

Looks like a great place to play “Dead Hooker Roulette”. See which guest finds the dead hooker under their bed.

Your comment is more true than you may be aware.

Lol who hasn’t stayed in that dump before lol

Who hasn’t published a story on it ?
http://features.waiting-forthe-sun.net/Pages/3days.html