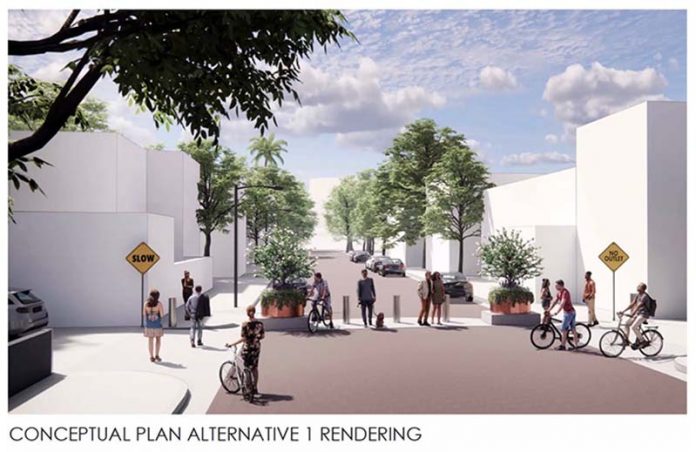 This City of West Hollywood hosted a community meeting yesterday to present community members with conceptual designs for the neighborhood to review and provide feedback on the Almont Drive cul-de-sac located on Almont Drive at the Melrose Ave alley. The community was presented with two Alternative plans.

Alternative plan #2 had a splash of color painted asphalt paving at one of the crosswalks, as well as painted bollards replacing the current chains. Plan #2 also offered a permeable concrete at parking stalls. 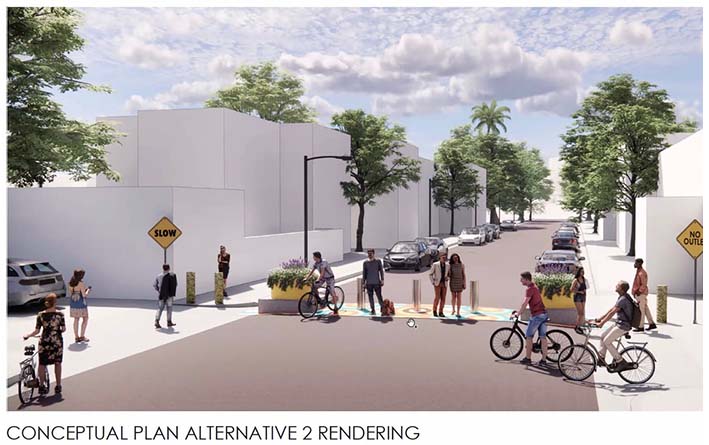 Residents liked the simpler and less whimsical Alternative Plan #1 with matching pavers across the alley and across Almont. Bollards (that can be remotely lowered by emergency vehicles when access is needed) would replace the current chain, and new large planters with slow growth trees would sit atop leveled concrete platforms. The sidewalks from Melrose to the cul-de-sac would be re-done and a couple of benches were proposed along the way.

Some residents expressed concern with the benches and a suggestion to replace them with chairs was brought up. The replacement of the chain with bollards made some neighbors uneasy because it would then allow motorcycle access through the cul-de-sac. But city representatives pointed out that Almont Drive is a designated bicycle route and bike passage must be considered.

City staff took notes. Further review and adjustments can be expected before this project goes before the City Council at a later date for approval. Completion is expected sometime in 2023.

Residents are encouraged to make comments and suggestions on these design proposals by contacting the City’s Neighborhood Traffic Management Program Specialist Walter Davis at (323) 848-6328 or wdavis@weho.org.