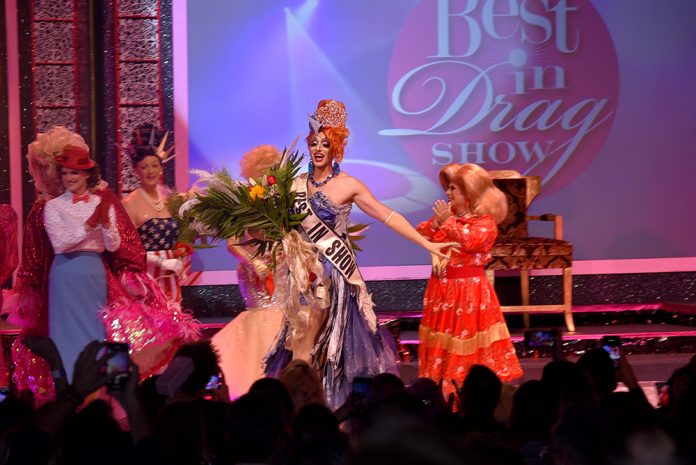 Then there was one. The Best in Drag Show 2019, a fundraiser benefiting the Aid for AIDS program at Alliance for Housing and Healing, crowned this year’s queen on Sunday, October 6, 2019, at the Orpheum Theatre in downtown Los Angeles. 100% of the proceeds from the outrageous and legendary beauty pageant directed and produced by Jeffrey Drew, will help prevent homelessness and hunger for men, women, children and families living with HIV/AIDS throughout Los Angeles County.

Standup comedian Kathy Griffin took a break from promoting her most recent documentary “Kathy Griffin: A Hell Of A Story”, to kick-start the show with her take on political topics. Her skit mainly focused on Elizabeth Warren, and the U.S. Senator’s recent cougar scandal, where a young male escort alleged he was hired for rough sex by the Democratic Presidential hopeful. It was pure Griffin gold. 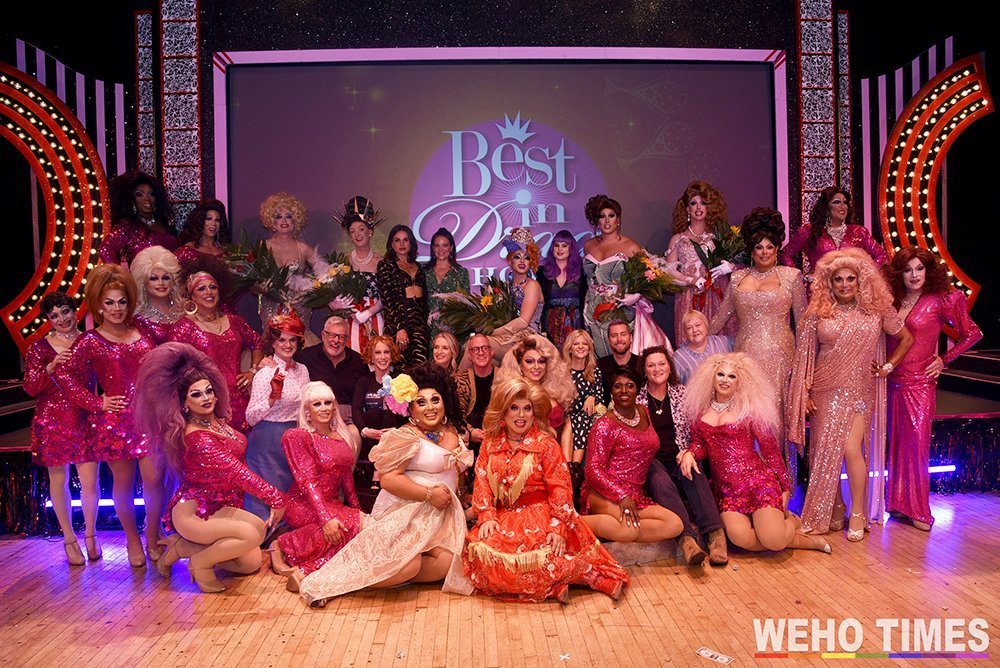 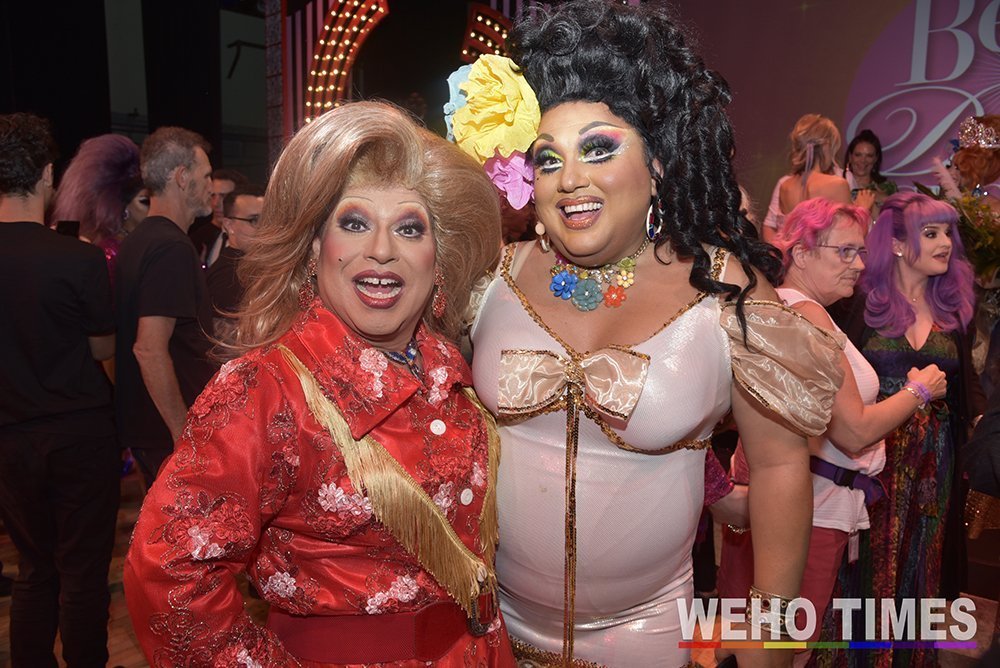 Tupperware pusher by day and Chico’s Angel by night, Kay Sedia, returned as Mistress of Ceremonies for a second year, taking over the spot of longtime host Patrick Rush, who is now a writer and judge in the show. Kay is no stranger to Best in Drag Show. She competed and was first runner-up back in 2000. Her ability to turn any situation into a punchline was an absolute delight, even in the moments where she struggled to read the names of the people who were making donations because, well, “English is hard.”

Chanelta and Tatiana Xtravaganza, played by Anil Patel and Luis Xtravangaza Camacho, are also veterans to the show. This year, they both took on the difficult task of standing before 1,400 people and making them laugh with the color commentary portion of the night. Chanelta and and Tati go way back. Their banter works because they’re good friends in real life who play frienemies on stage. The jokes were deliciously mean. No competing queen was spared on that stage.

The Best in Drag Show 2019 was not complete without a slew of celebrity judges. This year’s judges included Kathy Kinney (The Drew Carey Show) Performer Lance Bass, Lana Parrilla (Once Upon A Time), Arden Myrin (Orange is the New Black), Ever Carradine (The Handmaid’s Tale) Kelly Osborne (reality star and host) and Kathy Griffin. 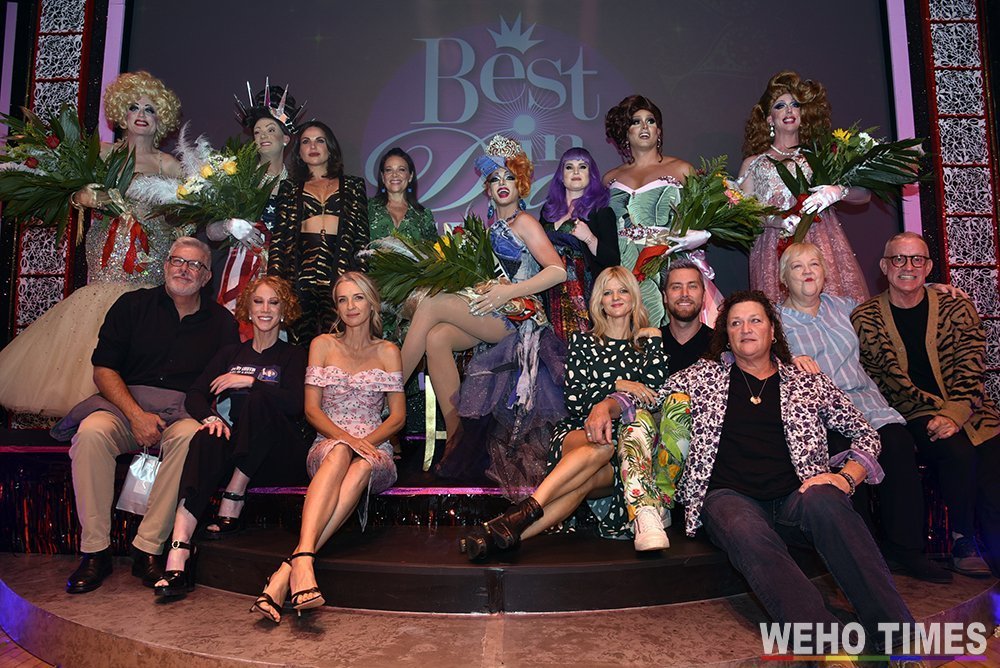 John Paschal returned as the Check Puppy, and of course, there were the Pinkies, who worked tirelessly down the isles collecting funds when they weren’t dancing in high heels on stage. Then there is the long list of volunteers dress in black who worked tirelessly to make sure the show ran smoothly. 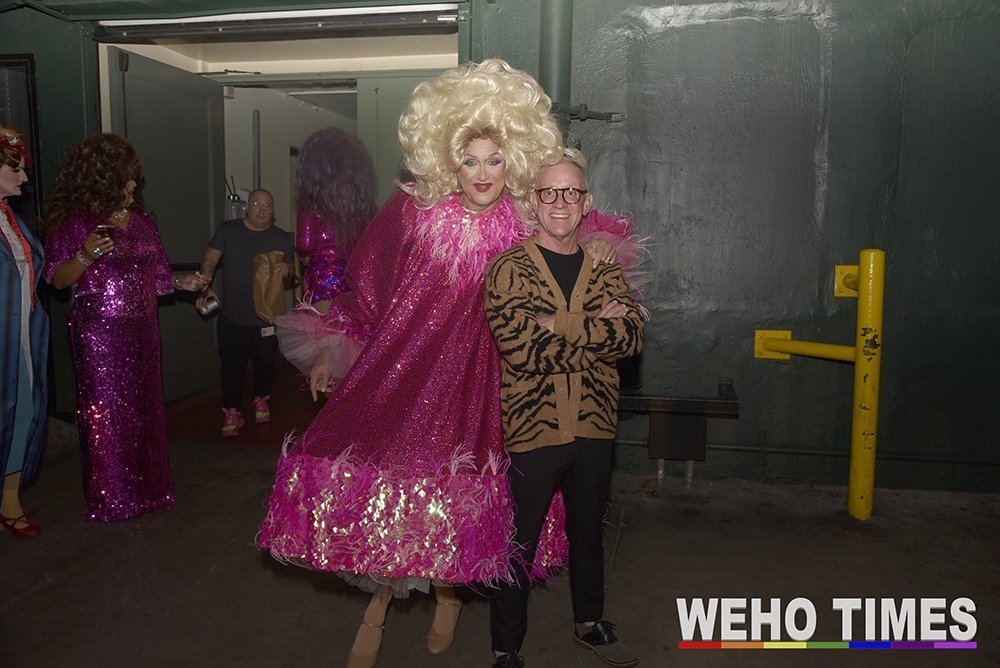 The Best in Drag Show 2019 contestants are as follows: 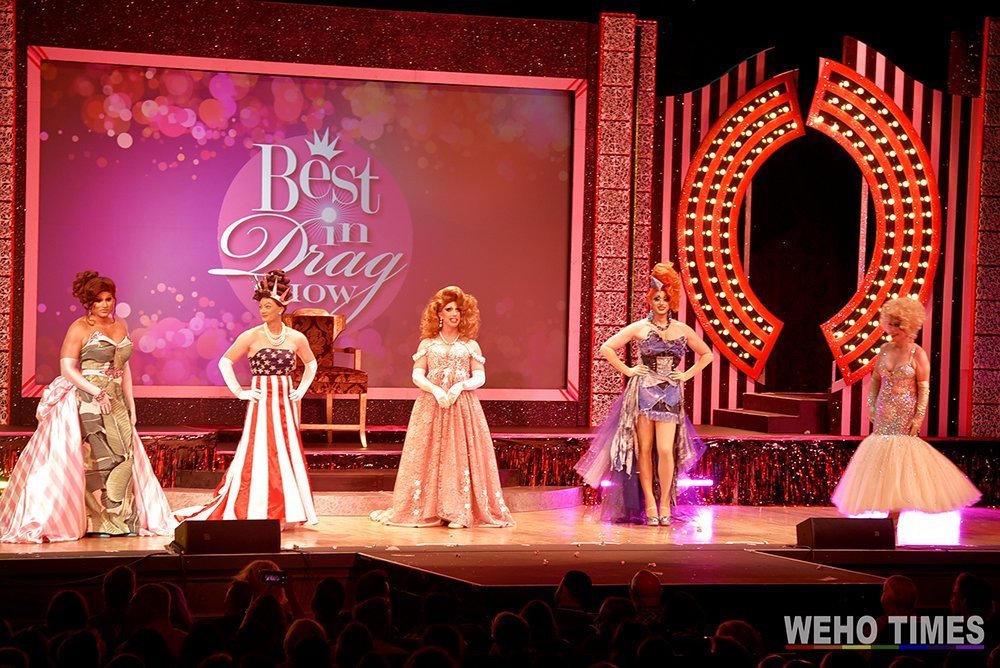 The five queens competed in four categories. There was the swimsuit competition, evening wear, talent and a question and answer. 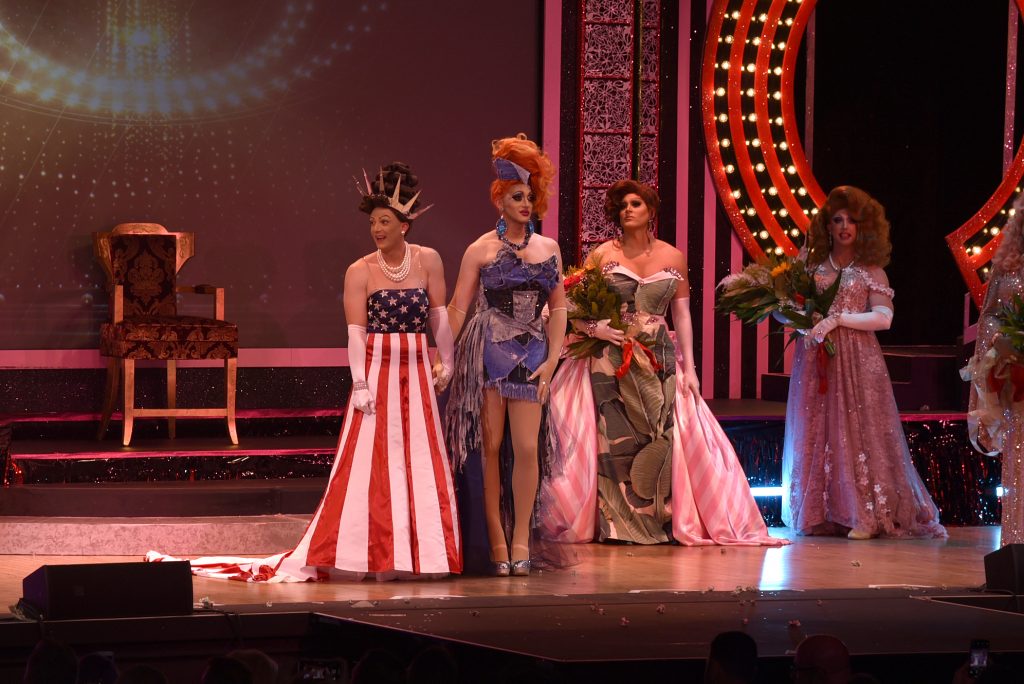 The crown went to Miss New Jersey—however the real winners are the men, women, children and families living with HIV/AIDS throughout Los Angeles County who will have aid in keeping a roof over their heads. 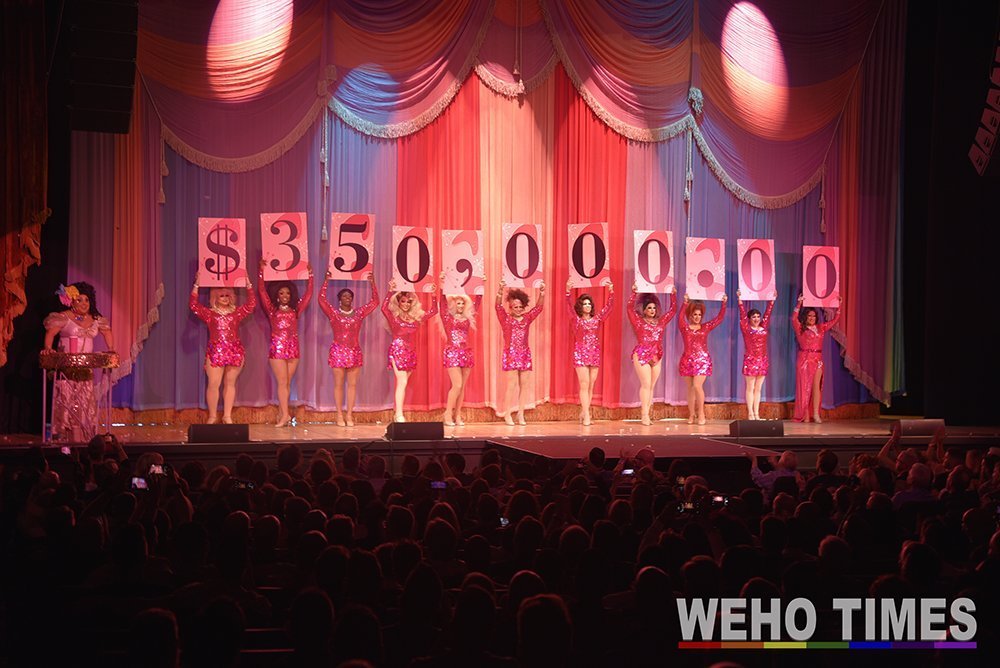 The Best in Drag Show dates back to 1989. It was created by Alexis Pittman and a small group of friends in his West Hollywood living room, the Best in Drag Show, then called Battle for the Tiara, came to fruition. The first event raised $400 collected from 20 people, and the show was subsequently moved to larger venues due to its increasing popularity. The current version of the show has run since 2003 and has raised over $6 million to support the work of Alliance for Housing and Healing’s flagship pro-gram, Aid for AIDS. The show is produced by an army of extraordinarily talented volunteers and staff from Alliance for Housing and Healing. This year sponsors include Michael Patrick King and Craig Fisse, Lifeguard, Dr. Serhat Gum-rukcu, Wells Fargo Bank, Gilead Sciences, Barbara Jacobs Events, L.A. Care, Kraut Law Group, and Sketchers.

Alliance for Housing and Healing sees housing as a structural intervention against the spread of HIV/AIDS and as a platform for healthcare, and are passionate about providing a broad continuum of high-quality care to those living with HIV/AIDS that reinforces residential stability. Whether a group residence with 24/7 care for those who are too ill to live on their own, safe subsidized apartments for individuals and families with a second diagnosis, or emergency financial assistance to pay rent and utility bills for those who are facing eviction and homelessness, Alliance for Housing and Healing is dedicated to improving outcomes for low-income persons living with HIV/AIDS in Los Angeles County. For more information on Best in Drag Show 2019 visit: www.alliancehh.org 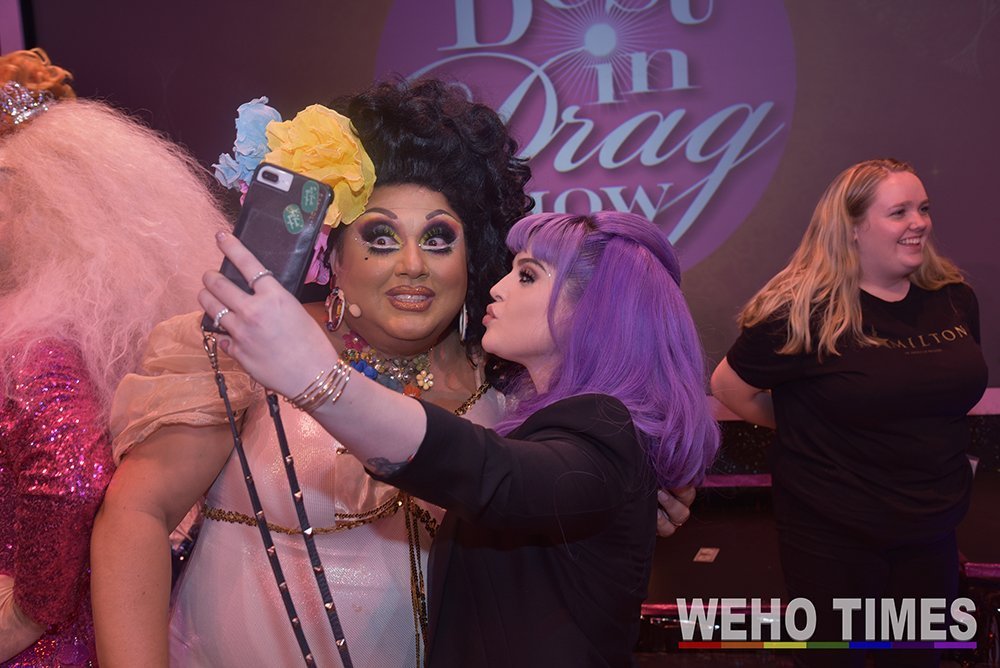