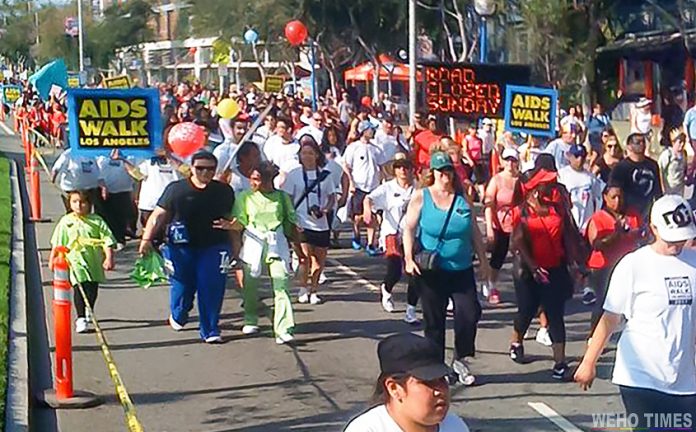 Participants of the annual fundraiser will make their way north on San Vicente Boulevard and head east onto Santa Monica Boulevard, at La Cienega Boulevard. The walkers will make a loop and head back west on Santa Monica Boulevard to Doheny Drive, and make another loop back east on Santa Monica Blvd. The route will end in West Hollywood Park where there will be food trucks and music to celebrate the completion of the walk. APLA Health & Wellness anticipates 10,000 participants in this year’s event. The 2.1-mile route is shorter than in previous years.

Due to the AIDS Walk, there will be limited street and lane closures in West Hollywood. Drivers should expect delays and plan accordingly.

Street closures will occur as follows:

Lane closures will occur as follows:

Additionally, the West Hollywood Park dog parks and basketball courts will be closed on Saturday, October 15, 2022, and Sunday, October 16, 2022.

To avoid traffic and parking delays, event participants are encouraged to use alternative modes of transportation such as ride sharing services or Metro. Some public parking structures/lots will offer a limited amount of parking at the following locations for a fee on Sunday, as follows (please note that some locations are not immediately adjacent to West Hollywood Park):

AIDS Walk participants can hop on one of several Los Angeles County Metropolitan Transportation Authority (Metro) bus lines that connect to the City of West Hollywood, including: 4, 10, 30/330, 105, 212/312, 217, and 218. More information regarding lines is available at www.metro.net and Metro will post service advisories regarding route changes for the event at www.metro.net/service/advisories.

AIDS Walk Los Angeles is the world’s first walk to fight HIV and AIDS and benefits APLA Health (formerly AIDS Project Los Angeles), which provides world-class LGBTQ+ empowering healthcare, support services, and HIV specialty care in Los Angeles County. 38 years ago, a group of fed-up activists, patients, advocates, and friends put their soles on the line to shake the government into action during the AIDS crisis. Since that first Walk in 1985, hundreds of thousands of walkers and their supporters have raised more than $92 million to combat HIV and AIDS. These funds are a vital lifeline that sustains APLA Health’s programs and services benefiting more than 18,000 individuals living in Los Angeles County, which continues to have the second largest number of people living with HIV in the country. To register and for more information, please visit www.aidswalkla.org or email aidswalkla@aplahealth.org or call or text (213) 201-9255.