AIDS/LifeCycle Cyclists will Ride Through West Hollywood on June 11th 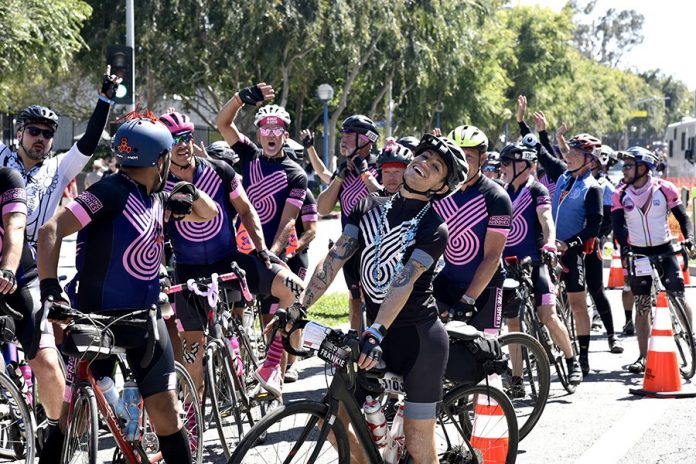 While the AIDS/LifeCycle cyclist do not require any full street closures, it is anticipated there will be traffic impacts due to the reduction of one eastbound traffic lane on Santa Monica Boulevard. Cyclists are expected to adhere to all traffic laws as directed by California Vehicle Code. West Hollywood community members and visitors are encouraged to take part in a tradition of cheering on cyclists as they complete their final miles of this long-distance fundraiser.

HIV and AIDS have had a significant impact in West Hollywood. The disease’s elevated infection rate among gay men caused a devastatingly high number of deaths in the City. The City of West Hollywood was one of the first government entities to provide social services grants to local AIDS and HIV organizations. The City of West Hollywood sponsored one of the first AIDS awareness campaigns in the country in October 1985 and the City’s response to the AIDS crisis has been recognized as a model for other cities, nationally and globally.

Support for AIDS/LifeCycle is consistent with the City’s core values and with ongoing City programs meant to commemorate the lives of those who were lost, such as World AIDS Day, the AIDS Memorial Walk, and the AIDS Monument which is currently in development.

The City actively participates supporting education and advocacy in the development of programs that can bring awareness about the HIV/AIDS epidemic and services to people living with HIV/AIDS. The City is currently implementing its HIV Zero Initiative Strategic Plan with vision to become an ‘HIV Zero’ city. A culminating goal of the HIV Zero plan is to build an inclusive community that supports underserved groups and honors the contributions made by people living with HIV.

For more information about the AIDS/LifeCycle event, please visitwww.aidslifecycle.org. For people who are Deaf or hard of hearing, please call TTY (323) 848-6496.