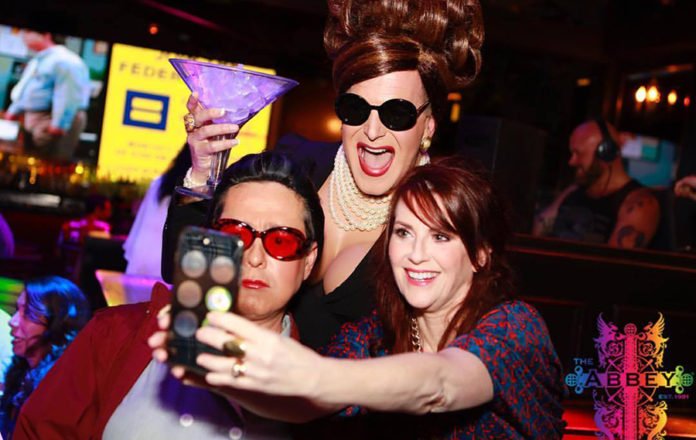 Will & Grace star Megan Mullally, and the sitcom’s creator Max Mutchnick, surprised fans of the show when they crashed the Abbey Food & Bar in West Hollywood during a Human Rights Campaign viewing party for the season premier of W&G.

Hundreds gathered at the world famous gay bar to witness the return of Will (Eric McCormack), Grace (Debra Messing), Jack (Sean Hayes) and Karen (Megan Mullally). Then Lullally made an unexpected entrance, and of course, she unexpectedly found herself face-to-face with drag versions of herself as Karen Walker. She thanked the crowd for supporting the show and encouraged everyone to keep Will & Grace a trending topic on Twitter. She then hammed it up for the cameras and performed a little dance number. Fans went nuts.

“What a great evening at The Abbey,” Abbey CEO and founder David Cooley, posted on his Facebook page. “Thank you Max and Megan for supporting Human Rights Campaign on your big night of the premiere of Will and Grace. Thanks for the love and support you show the LGBTQ community !! We love the show and love you. And thanks for the huge crowd that came to support the night. Trump will argue it wasn’t that big a crowd.”

The premier of Will & Grace was the most watched scripted show on television that Thursday night, with 10.2 million viewers tuned in to watch the main characters rip on the Trump administration.

The show only promises to get better with the return of Karen’s nemesis Beverly Leslie played by Leslie Jordan. “What else is there to say?” Leslie posted on his fan page. “WILL AND GRACE performed amazingly last night in the ratings! And BEVERLEY LESLIE AND KAREN WALKER are back at each other’s throats!! SO MUCH DAMN FUN!!”

Will & Grace returns next Thursday at 9/8c on NBC. To learn more, visit nbc.com/will-and-grace