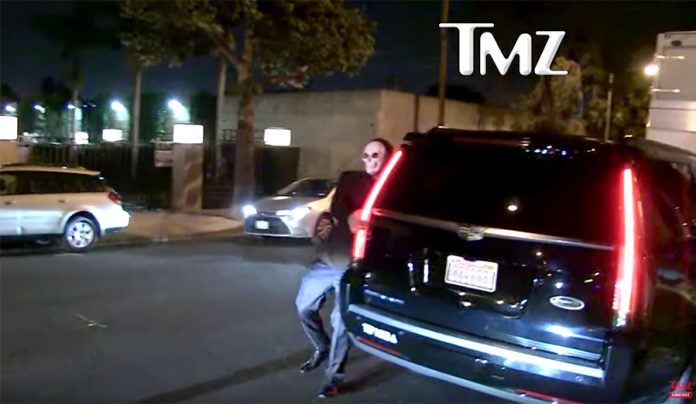 Actor Ben Affleck has fallen off the wagon and compromised his sobriety after a night of partying in West Hollywood this past Saturday, October 26. The slip-up happened months after he achieved one year of continuous sobriety this past August.

TMZ posted a video of an inebriated Affleck leaving Kipton La Peer Hotel, located at 627 N La Peer Dr, in WeHo, after a Halloween masquerade ball. He is shown wearing a skeleton mask with a female companion, in front of the hotel. The woman left his side to wave down their ride and Affleck could barely stand on his own. At one point he stumbled sideways and he held onto a nearby SUV to steady himself from falling on the ground.

Regardless of how much he drank, he was drunk enough to engage with TMZ. The man behind the camera asked him if he was dating again while Affleck stumbled past him without saying a word.

Later that night, Affleck appears to address the incident via his tweeter account, and used his stumble to bring attention to a worthy cause.

“HA, you got me,” reads the tweet. “I’m dating. But let’s be serious for a moment and talk about something that is actually important. I have been in recovery for over a year and part of that is helping out others. The Midnight Mission is an incredible organization that helps those in need with housing, training, development and recovery. I’m making a donation today because there are people battling addiction every day that don’t have the resources and need help. Raya, you in? Who else is with me?

According to TMZ, Affleck bounced back the following morning and was seen outside his ex-wife, actress Jennifer Gardner’s, home. “It happens. It was a slip,” He said of his previous night in WeHo. “But I’m not going to let it derail me.”

The 47-year-old father of three has struggled with sobriety. He made headlines when his equally famous ex-wife, Gardner, drove him to a rehab facility in Malibu on August 22, 2018. He’s had a sober coach, attended wellness classes in Los Angeles and focused on meditation to achieve one-year of sobriety.

“Battling any addiction is a lifelong and difficult struggle,” He posted on his Instagram account last in October of 2018. “Because of that, one is never really in or out of treatment. It is a full-time commitment. I am fighting for myself and my family.”