Actor and comedian Leslie Jordan has died this morning. According to reports, Jordan was driving in Hollywood Monday morning when his car crashed into the side of a building Cahuenga Boulevard and Romaine Street. It is believe the crash was due to a medical emergency.

“The world is definitely a much darker place today without the love and light of Leslie Jordan,” said spokesperson for Leslie Jordan, Robert Kovacik. “Not only was he a mega talent and joy to work with, but he provided an emotional sanctuary to the nation at one of it”s most difficult times. What he lacked in height he made up for in generosity and greatness as a son, brother, artist, comedian, partner and human being. Knowing that he has left the world at the height of both his professional and personal life is the only solace one can have today.”

Leslie was famously known for his work on popular TV shows like “Will & Grace,” “Hearts Afire,” “The Cool Kids,” “Call me Kat” and “American Horror Story.”

He was widely known in the West Hollywood community. He was a regular at the Big Gay Starbucks in WeHo before it closed down this past summer. He also hosted the West Hollywood Chamber of Commerce Creative Business Awards in 2019. He was also highly regarded in the recovering community and he was very open about being clean and sober.

He became a social media sensation during the pandemic with selfie videos he posted on his Instagram account which earned from 80,000 Instagram followers to a 5.8 million.

In 1990, Jordan portrayed the ski patrol director in Ski Patrol. In 2007, he guest-starred on the comedy drama Ugly Betty as celebrity-trasher Quincy Combs, and starred as Jesse Joe in the short-lived CW television program Hidden Palms.

Jordan starred in the pilot episode of Laugh Out, the world’s first interactive, gay-themed comedy show. On August 18, 2014, Jordan became a housemate in the 14th edition of the British reality game show Celebrity Big Brother. He was the second person to leave the Big Brother house (August 29, 2014). In January 2015, Jordan guest-starred in the British sitcom Benidorm for two episodes, as the character Buck A. Roo.

On November 1, 2017, Jordan appeared in the new British television drama Living the Dream, produced jointly by Sky and Big Talk Productions, but branded as a Sky Original Production.

In the fall of 2018, Jordan starred in the Fox sitcom The Cool Kids, along with Martin Mull, Vicki Lawrence, and David Alan Grier.

On April 2, 2020, it was announced Jordan will play the role of Phil in the Fox sitcom Call Me Kat, along with Mayim Bialik, Swoosie Kurtz, Kyla Pratt, and Cheyenne Jackson.

He appeared as one of four guest panelists on July 28, 2022, on the Gutfeld! TV show on Fox News.

TMZ reports that last time Leslie Jordan was spotted out in public last month, gauging his reaction to Elton John and Britney Spears releasing a new song together.

My heart is broken. He was a super sweet guy! 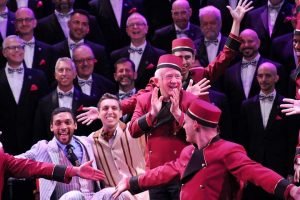 I saw Leslie Jordan in a one-man show at the Celebration Theater several years ago and he was just hilarious. What a chance to see one of the smartest gay performers in person.Sorry to hear he is no longer with us.May Leslie Jordan RIP.

What a sad day. This man was the epitome of an actor comedian singer, all around good guy. So sorry to hear this. Rest in peace.

Very, very sad news. He gave us a lot of laughs. Rest in Peace.xx