Activist Brian Pendleton Wants to Recruit You to #ResistMarch 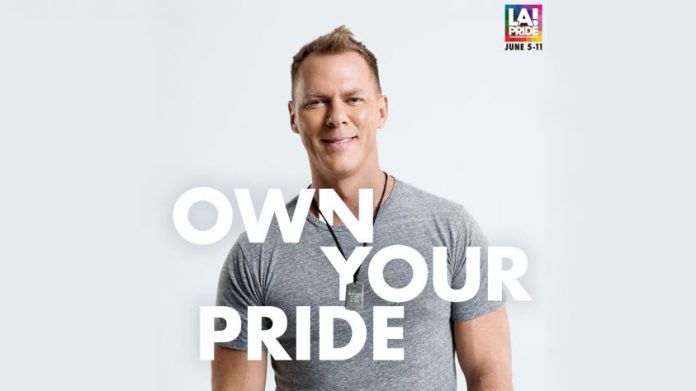 I interviewed activist, #ResistMarch founder, and Christopher Street West board member Brian Pendleton back in May. We discussed the importance of #ResistMarch, overall LGBTQ activism, the importance of unity, and our continued fight for equality and human rights. I also learned a few personal things about him and his family. Did you know his dad was a rocket scientist?

In case you’ve been living under a rock, the #ResistMarch is a human rights march that’s replacing this year’s LA Pride Parade on Sunday, June 11. Resisters are meeting at 8 a.m. on the corner of Hollywood and Highland and marching for 3.1 miles from Hollywood to West Hollywood on the corner of Santa Monica and San Vicente. It is bound to attract hundreds of thousands of peaceful protestors into the city of West Hollywood. You don’t want to miss it.

A portion of my Brian Pendleton interview was first published in the West Hollywood City of Commerce Works Magazine. Space is limited in print media, I’m posting the complete Q&A here to continue the dialogue and spread awareness on #ResistMarch.

To become a member of WeHo Chamber, visit: wehochamber.com Where are you from originally?
I was born in Ohio, but I moved here when I was three. My dad was a rocket scientist. He designed and built rocket engines in the West San Fernando Valley, so yes, my dad was a rocket scientist. So I grew up here and went to school here. I was in Hollywood as an 11th grader I believe, the day West Hollywood became a city. I was at my friend’s house at Hancock. He still happens to live there. I’ve been around for a while.

Is your family aware and supportive of your activism in the #ResistMarch?
Yes, my family knows. I was talking to my sister just the other day. Some of them listen to NPR or read the LA Times, or they read about it Vogue and saw it organically. It’s been fun for them to watch it all happen, but this isn’t new to them. I’ve had a lot of wonderful things happen in my life and they have always been completely supportive.

What was your first activism like?
My first activism was when I worked at Sixth Gallery Cafe, which was next door to Micky’s bar. The very progressive owners shut the doors and said we had to hit the streets after Pete Wilson had vetoed AB101. I was a kid in my 20s and it was the first time I saw people gathering in the street and protesting and marching down Santa Monica, to San Vicente, to Wilshire. We closed down Wilshire Boulevard. The next night, we closed down the Century Plaza Hotel. And then next day, we went all the way down to the Federal Building. It was powerful on so many levels. I was new to the community, but seeing my people come together, who really cared about something, it woke activism in me and I’m sure thousands of people like me. It really sent me in a direction in my life.

Can you tell us about the Facebook post that started it all?
The genesis of my post was to postpone or not do a parade this year—let’s do a march instead and do the parade next year. Within a few days we had over 30,000 likes. It was incredible. It obviously spoke to a pent-up demand to want to do a little bit more and maybe make a pivot this year and be out there in a meaningful way—not that the parade isn’t meaningful—it’s an incredible celebration, but people are feeling nervous about the times that we’re in, so this gave people an outlet.

At what point did you realize a #ResistMarch could actually happen?
I saw that something was going to happen pretty immediately. Within an hour, it was 5,000 likes. I saw that there was something going on. But then people from LA Pride called and community leaders started reaching out, saying that they’d really like to see this happen. Even if you have a post that goes viral, that doesn’t mean it’s going to turn into something, but right away people in the community reached out and said let’s make something of this. I began talking to LA Pride about how we ca make this happen, so this march doesn’t run over their parade. The universes aligned. People want to see unity. It’s free. It’s colorful. It’s color blind. People want to go out and show the world and show Los Angeles that we care about human rights.