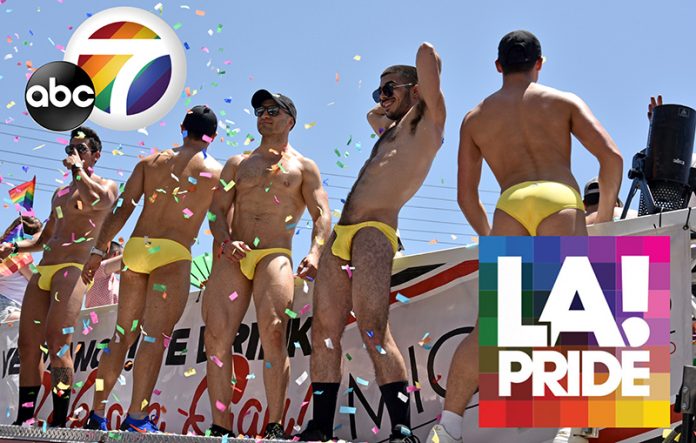 The LA Pride Parade 2019 is coming to the homes of Southern California. For the first time in LA Pride history, the annual gay parade will be broadcasted on ABC7. The two-hour broadcast will air live on Sunday, June 9, from 11 a.m. to 1 p.m. There will be a pre-parade preview show at 6:30 p.m., on Saturday, June 8.

“We’re proud to bring the LA Pride Parade celebration to viewers across Southern California,” said Cheryl Fair, president and general manager of ABC7. “Our collaboration with LA Pride is a commitment to reflecting and serving the diverse communities that represent our audience.”

This year’s community grand marshals are Phill Wilson and the Los Angeles LGBT Center will be the organizational grand marshal.

“I am honored to be a part of this year’s Pride celebration,” Wilson told ABC7. “The LGBTQI community has come a long way in the last 50 years. It has not been without heartache, pain, sacrifice and growth. I am humbled to be among such a powerful and diverse group of grand marshals. Together we represent how much stronger we are when we celebrate all of what we are.”

The first LA Pride pride parade, and the world’s first gay pride parade, was on June 28, 1970. According to Reverend Troy Perry, “The Police Commission voted 4 to 1 to place conditions on the parade permit. And they were, 1) you’d have to put up a bond for a million dollars to pay out the businesses when people throw rocks at ya’ll 2) you have to put up a cash bond of $500,000, and 3) you’ve got to have at least 5000 people marching.”

The ACLU got involved. The same day, the California Superior Court ordered the Police Commission to issue a permit to the organizers with the receipt of the $1,500 security payment, but that all other requirements be dropped.

The parade is known for its various messages of activism, it’s scantily clad men dancing on floats and women, not to mention the commercials on parade that are bound to make the coverage interesting.

The theme for LA Pride Parade 2019 is #JUSTUNITE.

This is a big deal. LA Pride has not always gotten the best coverage by the mainstream media. They would broadcast the freakiest leather daddies and drag queens to represent the entire community. I’m curious to see if they will pass this off for a gay watered down Tournament of Roses Parade, or will they show it all like the the leather vested bull dyke on a bike to the sweaty hairy go go dancers on a Mickys float.

This is pretty awesome! It took 40+ years for a major network to broadcast the Pride parade.