The California Department of Alcohol Beverage Control (ABC) has filed an action against Fiesta Cantina WeHo, located at 8865 Santa Monica Boulevard, charging the restaurant and bar with selling alcohol to a minor decoy. The complaint was received on September 23, 2021 and registered this month on February 3, February 2022. The action against Kahuna Restaurant Group LLC has not yet cleared as of the posting of this piece.

ABC states that under a law passed by the state legislature in 1995, licensees face increased penalties for sales to minors. A first time sale may result in a fine or license suspension. A second sale to a minor within a three-year period is an automatic license suspension. A third sale to a minor within a three year period may result in license revocation. It is not yet clear if this is a first time sale at Fiesta Cantina WeHo. 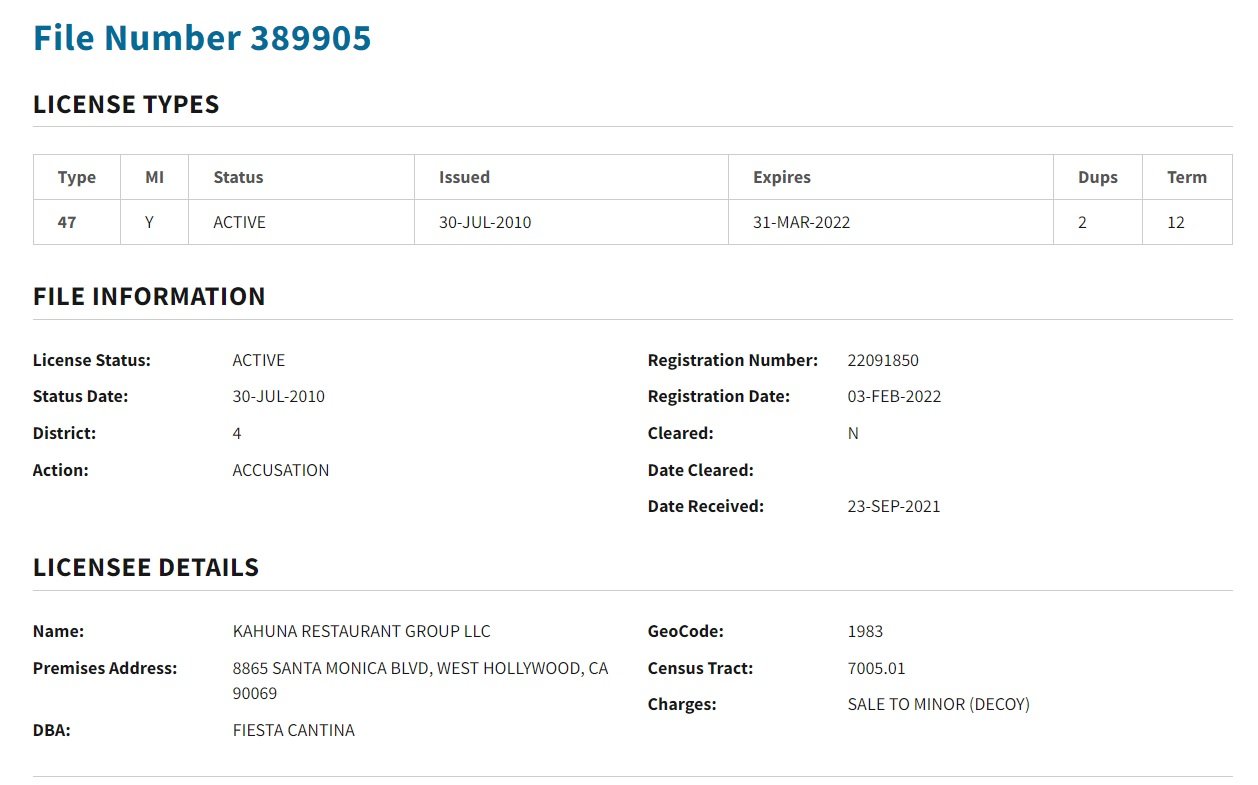 The goal of ABC’s Minor Decoy Program is to reduce the number of licensees who sell alcohol to minors and reduce youth access to alcohol.

The Minor Decoy Program allows local law enforcement agencies to use persons under 20 years of age as decoys to purchase alcoholic beverages from licensed premises. As of October 1st, 2004, the Department of Alcoholic Beverage Control (ABC) has been using its own decoys.

The Decoy Program has been recognized as an excellent method to attack the problems associated with the unlawful purchase and consumption of alcoholic beverages by people under the age of 21.

In 1994, the California Supreme Court ruled that the use of minor decoys was not entrapment and did not violate due process requirements. Since the Supreme Court ruling hundreds of law enforcement agencies have used the Decoy Program. When used on a regular basis, the percentage of licensees selling to minors drops dramatically.

Immediately following the Supreme Court ruling licensees in some communities were selling alcohol to minor decoys 50% of the time. After continuous use of the program over a period of time, that percentage dropped to less than 20% in some cities.

State regulations that took effect January 2, 1996, require that the decoy be less than 20 years of age; display the appearance of a person under 21 years of age; shall either carry his or her own identification showing the decoy’s correct date of birth, or shall carry no identification; a decoy who carries identification shall present it upon request to any seller of alcoholic beverages; and shall answer truthfully any questions about his or her age.  Following the completed sale, but not later than the tie a citation, if any, is issued, the peace officer directing the decoy shall make a reasonable attempt to enter the licensed premises and have the minor decoy who purchased alcoholic beverages make a face-to-face identification of the alleged seller of the alcoholic beverage (Rule 141).

After the violation and face to face identification is completed, the decoy and suspect should have their photograph taken together.  A decoy should also be prepared to write a report and willing to testify in court.

In addition, the Department strongly encourages law enforcement agencies to notify all licensees by letter of the results of a pending Decoy Program. The objective of this notification is to minimize the sale of alcoholic beverages to minors.

Local agencies are also urged to consider notifying the local media of the Decoy Program. This gives licensees a second notification and may elicit editorial and community support for the agency.

ABC has an Alcohol Policing Partnership (APP) Program to work with law enforcement agencies to develop an effective, comprehensive and strategic approach to eliminating the crime and public nuisance problems associated with problem alcoholic beverage outlets.

Communication with a representative at the West Hollywood Sheriff’s Station has not confirmed if WeHo Sheriff’s partnered with ABC on the decoy operation that took place at Fiesta Cantina WeHo in September.

In my opinion, this is an appropriate and effective use of ABC enforcement resources. Not relevant in this case, but I do not agree with using ABC resources to enforce public decency issues that may be in conflict with local community morals and norms. Again, just my opinion but those violations should be secondary to actual violations related to the sale and serving of alcohol.