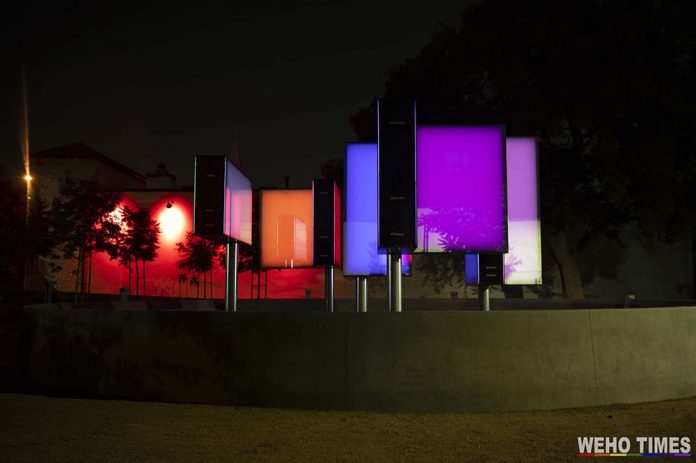 The Parallel Perpendicular Art Installation by Phillip K Smith III was completed late last month at the new West Hollywood Park. I have obsessed over this art installation since I first learned about it.

Random trips to the construction site on Robertson Boulevard over the summer gave me a glimpse from the rigging stages, right down to the finishing touches as the Park nears completion. I literally propped a step ladder to look over the fence and keep tabs on the progress.

The Parallel Perpendicular Art Installation by Phillip K Smith III consists of five freestanding mirrored volumes composed of parallel and perpendicular planes hovering above a 40-foot diameter circle. By day, these forms reflect the park visitors and environment as well as the surrounding West Hollywood views. 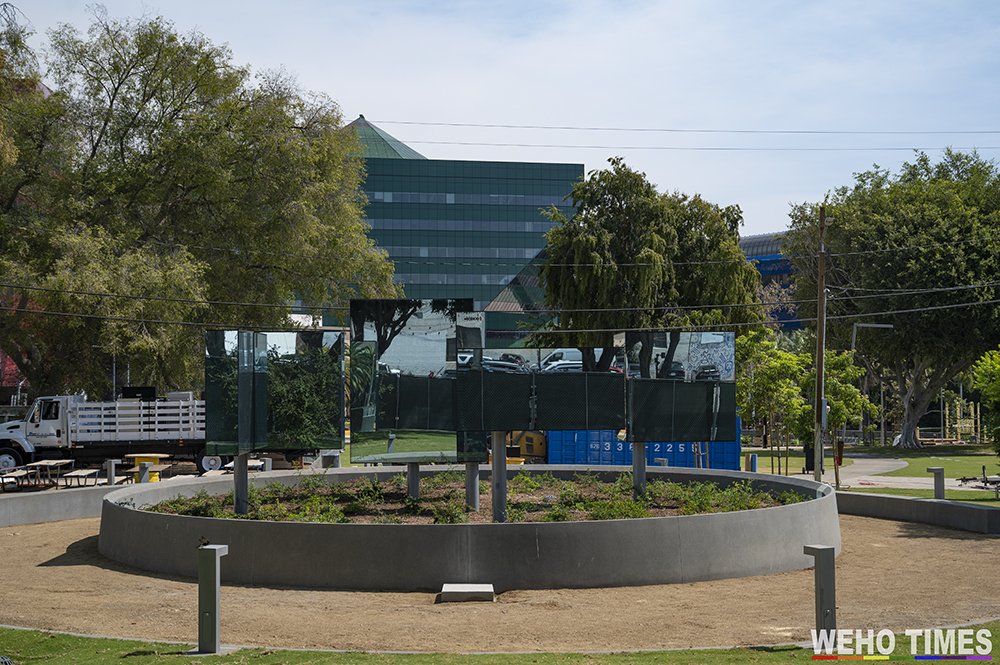 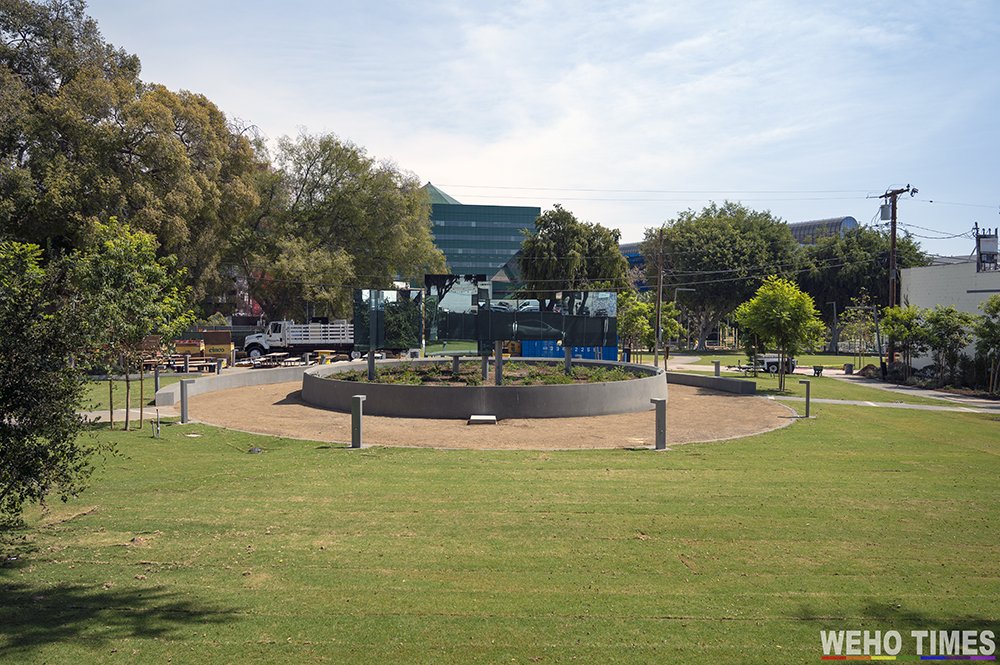 The best part is at night when the mirrored surfaces light up to become pure fields of color that slowly move through the color spectrum. These colors reflect off of each other, merging upon colors, creating new spaces of color, projection and reflection.

Trips past Robertson whenever I was in the vicinity paid off one evening on August 24th. I had the chance to see the panels light up. They were only lit for a short moment at random nights, but it was long enough to see the installation jump out of the renderings of the city’s website. 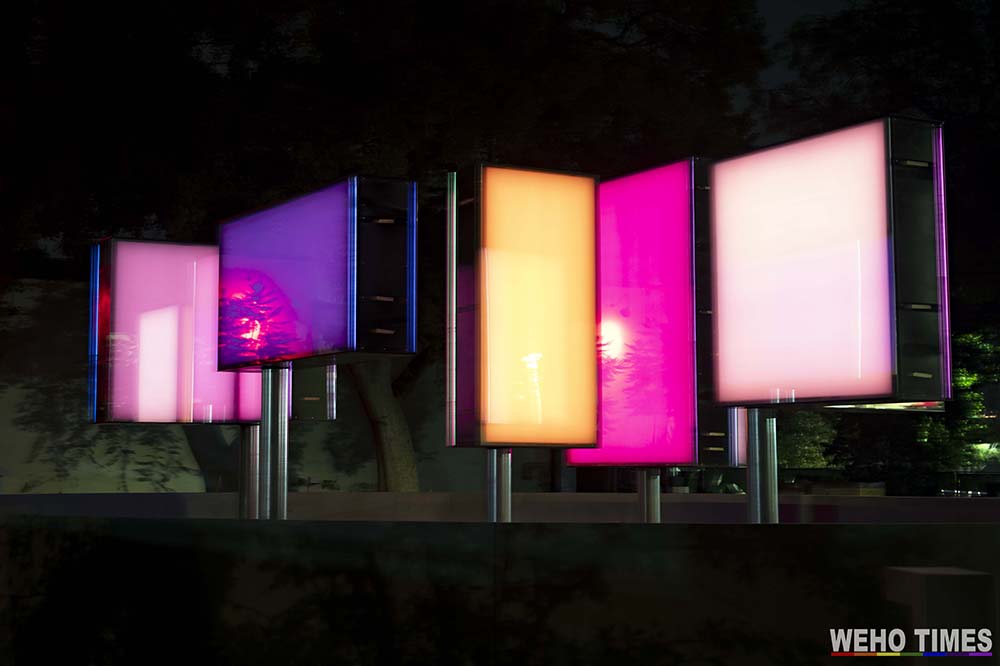 Parallel Perpendicular is meant to be an entirely interactive piece. This interaction can occur from a single point from a park bench and watching the sun and clouds off mirrored surfaces. Interaction can also occur through movement as trees, ground, sky and people reflect across the park with reflections directly behind you, both of which collage together with framed images of the view in front of you. At the same time, you can approach the work and see yourself within it.

Located in the center of the Robertson-adjacent portion of West Hollywood Park, the scale of Parallel Perpendicular is supposed to be in direct response to the more intimate atmosphere of this zone. The installation will definitely draw people into West Hollywood Park both during the day and in the evening. However, the loud music coming from the Abbey Food & Bar is going to be an issue for anyone trying to have a meditative moment while they look at the changing colors, so the usual complainers will most likely have their say.

Parallel Perpendicular is built from a stainless steel internal framework that is wrapped with a custom glass lay-up of 2-way mirror and clear mirror layup with an internal safety lamination. The 18” wide “sides” of each of the elements is composed of regular ¼” mirror with a safety lamination adhered to the backside. LED lighting at the interior of the framework provides an even glow across the various surfaces while simple hardware components control the timing, programming, and power supply for the lighting. The power components will be contained within the framework of each, while the lighting controls can be accessed remotely. All components are weather-proof able to withstand the rain, heat, and cold of West Hollywood. All 5 of the elements “hover” on a 12” diameter brushed stainless steel tube (internally bolted directly to the framework) that provides both structural support and connectivity for wiring.

Phillip K. Smith III was commissioned to create Parallel Perpendicular for the City of West Hollywood. He received his Bachelor of Architecture at the Rhode Island School of Design. From his Palm Desert, CA-based studio, he continues to push the boundaries and confront the ideas of modernist design. Drawing inspiration from the cold rigidity of the Bauhaus movement, the reductive geometries of minimalism, and the optic sensation of California’s Light and Space movement, Smith III attempts to resolve the complex challenge of finding a natural state of life and spirit within these ideological aesthetic constrictions. The results are deceptively simple and compelling objects that seem to breathe and move as you observe and interact with them.

That is great looking. I hope drunk people don’t vandalize it 🙁

I can’t wait to see these. They look stunning.