Erickson has much more to celebrate than a Biden win. He ran a victorious campaign that landed him one of two open seats for city council by 7,188 votes, placing him second to to challenger Sepi Shyne, who is in the lead by 7,927 votes, according to election numbers updated today, November 10, 2020, at 4:01:21 p.m. He beat incumbents John Heilman with 1,080 votes and incumbent John Duran with 3,898, making him the youngest council member in West Hollywood.

We caught up with John Erickson the day following the spontaneous Election 2020 celebration in WEHO for a spur-of-the-moment Q&A. The young candidate discussed the challenges he faced while campaigning during COVID, making connections despite the pandemic, getting endorsed by the Mayor of West Hollywood and what it was like to win a city council race as a young, first time candidate. Despite his jubilation, he manages to remain humble and knows there is much work do be done to push his progressive values and ideas that he discussed during his campaign. 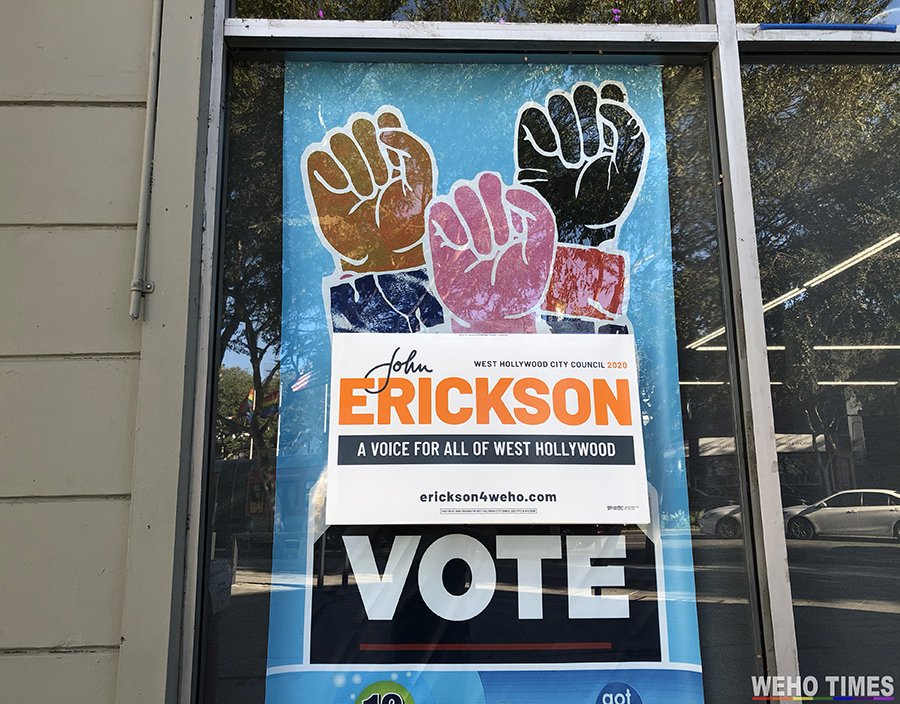 What did you think of the Election 2020 Celebration in WeHo?
It was truly a moment of jubilation. So many people were out there. I think shedding the weight, and the pain, and the fear that the last four years has caused to so many of us was a great feeling. Although we’re in a global pandemic, and we need to make sure we stay safe, it was great to see people feel the joy. The energy that was exuding was incredibly powerful. I compare it to the Women’s March of 2017. It gave a lot of us the energy to continue.

How do you feel about winning a seat in the West Hollywood City Council?
I’m truly honored and humbled by the people of West Hollywood who voted for me and supported me this entire race. I am really looking forward to working with Sepi [Shyne] and the rest of the city council, pushing the progressive values and ideas that we spoke about in the campaign, and all that we need to do to bring the city back from COVID and moving our city forward in the right direction. I want to extend my sincere gratitude to Mayor Pro-Tem John Heilman. He’s a personal hero of mine, as well as council member John Duran for his service to the city.

What was campaigning like during COVID-19?
I feel like I met so many people actually. What COVID taught us is that every personal connection really matters. A friend connecting us with five other friends that live in the city or have a business and they care about certain issues, and them reaching out to their network, it was about connection. Truly, if COVID taught us anything, it is how tight our community is, and how truly rich and diverse we are. Of course, I would have loved to have gone door-to-door. There is nothing like some canvasing time. I personally called voters every single day for months. I heard their struggle, they’re concerns, their wishes. I became closer with a bunch of residents who now have my personal phone number. They call me and text me and they are so happy about this win. I think this is what a council member should do. I hope to meet these people one day.

Are there any moments in the campaign that stand out for you?
There is nothing quite like getting endorsement from groups that you work with and admire and push for. It means a lot when they say we choose you, we want you to lean on these progressive values. It terms of moments, there are so many. I honestly think that being a first time candidate and I’m now the youngest person on the council, it’s just like, ‘oh my God, we can do it.’ I think if I learned anything from this campaign, it is that it’s friendships, it’s relationships, it’s who you are and where you come from that help you realize you can win and that you have a community standing behind you. There are so many moments. Right now I’m truly just so thankful to this city and everyone who supported and shared all their love and friendship.

Were you confident that you would do well?
I knew it was going to be a race. I thought it was going to come down to John, John, Sepi and myself. I didn’t know how well Larry [Block] would do. I don’t think anyone knew what was going to happen, because it was a November General Election. We saw the massive turnout. So you call every single person, I made 25,000 phone calls in the campaign, and because of COVID, the race obviously came down to who can raise money, who can reach the most people and who can run an aggressive campaign. But you know, everyone ran great campaigns that really talked about issues. You saw that in the debates. People had really great visions for this city. From Noemi Torres who shared a really positive message about the city, to other people like Mark [Farhad Yusupov] or Larry. It’s always hard to run for election. It’s very scary. It’s a process that we all faced together with ZOOM and all of these things.

Were there moments of doubt?
Yes. Of course. Everyone has moments of doubt because it gets overwhelming. I think for a first time candidate, it’s always, can you raise money to run a race? Can you get endorsements from people? Will people actually vote for you? There is always that moment. You just take that leap of faith. Sometimes it works out. I think we saw that on a National level. People wanted change in every level of government, from the DA, to the Board of Supervisors, to everything that we saw right down to our city council.

The Mayor of West Hollywood Lindsey Horvath, endorsed you, what do have to say about that?
Lindsey Horvath is an incredible leader who I have looked up to my entire time. It’s my privilege to call her a friend and now a colleague. She took a chance on a challenger. Of course, she knows who I am personally, but she endorsed the campaign because she believed in electing young people and electing progressive leaders. I really took that endorsement so seriously. I know from being in the political scene, how important that endorsement means. I’m really excited to work with her. I’m really excited to work with all the council members, from Lauren Meister, to John D’Amico, we’ve all been speaking and I’m really excited to get to work and make sure this city is exactly what it needs to be.

You invited members of the recovering community to a meet and greet via ZOOM. What was that like?
Recovery is a huge thing for me. I have so many friends in the recovery community. I will be there. And I will help protect and champion those issues. From meeting spaces, to the Log Cabin–people forget that I’m the only person who reached out to our Los Angeles County Supervisor Sheila Kuehll, to get her to send a letter to the city of Beverly Hills to save the Log Cabin. The thing about this campaign is that not one person alone could fix things. There isn’t a magical savior. It takes team work. It takes coalition building. It takes people that love this city.

At what point did you think you were going to win this election?
Everything I do, no matter if it’s a board I sit on, or the commission work that I do, or my personal activism, I work my butt off. That’s who I am as a person. I really do want to help people. I do want to make sure people live great lives. I personally called voters for months on end. I got this feeling [on election day] that ‘I think I’m going to win.’ But that only told me to work harder.

Was it nerve wracking seeing the numbers?
I didn’t. I wasn’t controlling the computer on election night. A friend was looking at it and telling me. The first batch comes in and you’re like, well how many votes are left? It could’ve changed the next day. Obviously the margin grew more over a thousand votes. Seeing the numbers when they first came out, it was an experience that I’ll never forget. It made me think about how I started as an intern at City Hall. I was an intern in City Council. I remember sitting in one of their offices one day and thinking, ‘I would really love to serve this city and this community,’ and now I get that amazing opportunity to do so as a council member. I’m really looking forward to get to work, because now the real work begins.

What was your reaction when you realized you are now a city council elect?
I cried. We invested so much. We launched in April. It’s been a really long journey, from endorsements to meeting, to ZOOM, to meet and greets, to everything. It just comes out when you see the hard work pay off. I’m an easy crier. I cried a little bit. Then you smile and then I think, it’s time to get to work.

Have you done anything to celebrate your win?
I’ve been celebrating in very small ways with friends. I’ve been seeing them and being happy with people who supported me, my community and my family. I have a feeling once COVID is quote-unquote, ‘done,’ Sepi and I will have to throw a really late happy celebration party.

What did you think of the Election 2020 Celebration in WeHo? It was truly a moment of jubilation. So many people were out there. I think shedding the weight, and the pain, and the fear that the last four years has caused to so many of us was a great feeling. Although we’re in a global pandemic, and we need to make sure we stay safe, it was great to see people feel the joy. The energy that was exuding was incredibly powerful. I compare it to the Women’s March of 2017. It gave a lot of us the energy… Read more »

Bought by developers. A legacy to Heilman. A byproduct of Harvath. At least it’s not Duran. The lesser evil. Where have I heard that before?