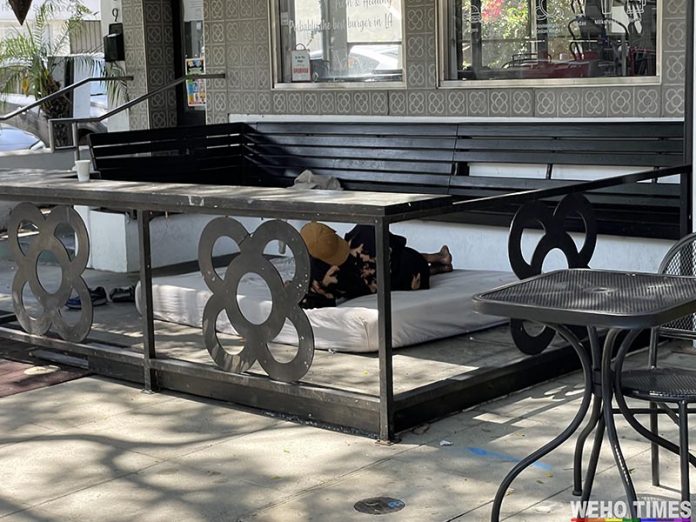 WeHo Times received numerous complaints that a mattress made its way back to Santa Monica Boulevard and is being used by unhoused individuals, highlighting problems with affordable housing, mental health issues and access to outreach services in the City of West Hollywood. This past Thursday, May 19, 2022, two homeless bound individuals were seen camping out on a mattress in the patio area of the now vacant All The Way Burger space, at 8731 Santa Monica Boulevard, sparking outrage and concern.

“I just got back from Chicago and I come home to this,” said one passerby. “What is the city becoming when people can literally move a bed to the street and make themselves cozy on the boulevard? You used to only see this sort of thing on Skid Row in Downtown L.A. It’s ridiculous. They even hung a painting from a tree to make it more cozy.” 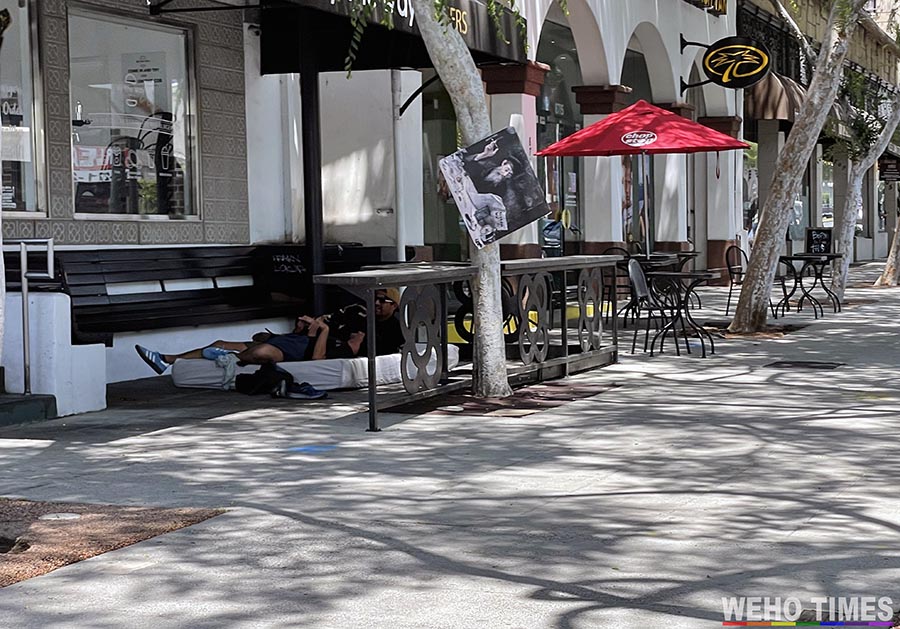 “People don’t seem to care when they see a person sleeping on the hard cold concrete,” said another person. “These people need help. Where are all the service providers the city of West Hollywood boasts about? This is too close to home for some people. They don’t want to see it, but guess what, people need a place to sleep.”

“How does a mattress even make it to Santa Monica Boulevard?” Asked another community member. “Are trucks dumping them out on the street? Are we going to have beds lining up all over the city now?”

According to a local business owner, “Irresponsible people who move out of their apartments and just ditch their mattresses on the curb are to blame for what we are seeing. Somebody left a mattress out in front of my building and I saw a homeless guy drag it down the street. That is why we’re seeing them on our sidewalks.”

The mattress in question was removed as of this afternoon, but the two unhoused individuals are still camping out at the patio of 8731 SMB.

WEHO TIMES received similar complaints on April 18th when an individual slept on a mattress on the busy corner of Santa Monica and San Vicente Boulevards right across the street from the West Hollywood Sheriff’s Station. The reactions were similar, calling out the city for not doing more to help the unhoused and blaming the WeHo Sheriff’s for not swooping them up and removing them from the street.

The City of West Hollywood recently resumed its Homeless Initiative program to provide on-site outreach and services at West Hollywood Library for community members who are experiencing homelessness. The collaboration with the Los Angeles County Library and providers was paused due to the pandemic. The assistance program began on May 2, 2022.

The assistance program, which began providing outreach and services in October 2016, is a strategic collaboration between the City of West Hollywood, LA County Library, and the City of West Hollywood’s contracted social services provider organizations which include APLA Health, Ascencia, Los Angeles LGBT Center, Step Up on Second, and Tarzana Treatment Centers. The organizations are partnering to provide on-site weekday outreach hours to help people connect to services and support at West Hollywood Library, located at 625 N. San Vicente Boulevard.

The assistance program offers outreach and services at West Hollywood Library in the second floor meeting room during the following hours, unless otherwise noted:

The City’s West Hollywood Homeless Initiative seeks to effectively address homelessness with a multi-disciplinary, multi-agency, collaborative response. If you are concerned about a community member who is homeless, call the West Hollywood Homeless Initiative Concern Line at (323) 848-6590. If your concern requires time-sensitive assistance during nights or weekends, please call the West Hollywood Sheriff’s Station non-emergency number, (310) 855-8850. Visit www.weho.org/homeless for additional information.

There is help out there but you need to accept the help. There are plenty out there that don’t want to improve their situation. All they care about is their next high or where their next bottle of booze is coming from. And then you have the mentally ill that we let wander the streets and wallow in their own filth. If someone is high or drunk on the street they should be given a choice either go to a rehabilitation center where they can get help or go to jail. The mentally ill should be evaluated and if they… Read more »