The 9/11 monument of 3-Year-Old David Reed Gamboa Brandhorst has found a new space at the newly built West Hollywood Park. The monument currently sits at the new playground in remembrance of David and his is two adoptive dads, Ronald Gamboa, and Daniel Brandhorst, who were killed after hijackers flew their plane, United Flight 175, into the South Tower of the World Trade Center in New York City on September 11, 2001. He was one of the youngest to die on 9/11. He would have been 23 years old today. 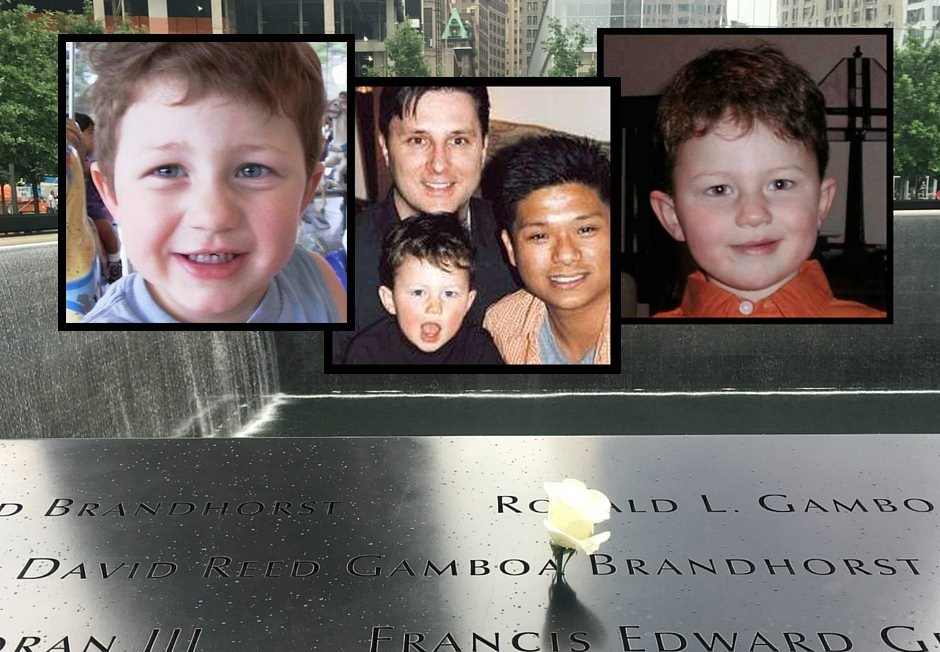 Dawn Rodgers, Daniel Brandhorst’s sister, and David Brandhorst’s aunt, reached out to WEHO TIMES when she learned that the old West Hollywood Park was being demolished and renovated last November. She had questions regarding the memorial plaque, unsure if the monument would return to the new West Hollywood Park. She said the family would like to have it if it was not part of the new park’s plan—however former council member John Duran and governmental affairs liaison for the City of West Hollywood, Hernan Molina, assured his family that the David Reed Gamboa Brandhorst monument would have a new home at the new park.

Indeed the memorial survived the renovation of the old park and playground. Gone are the original big slide and swings the boy once played in, but the brass plaque is in its original monument and currently faces a new swing set, slide and other colorful playground game sets that 3-year-old David would have loved. Although his family lived in Los Angeles, David played at West Hollywood Park a lot. 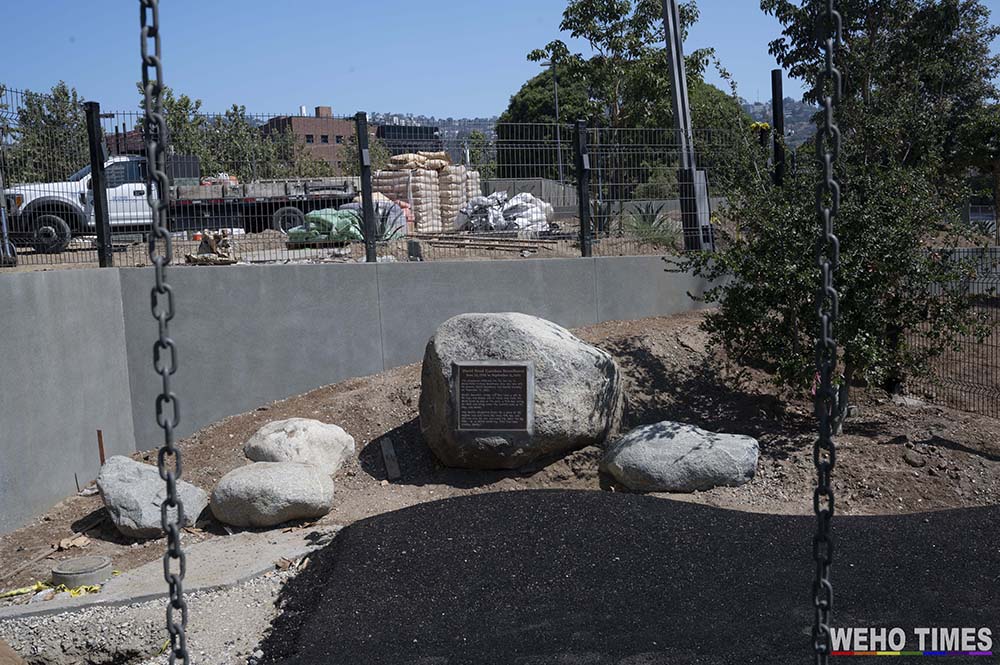 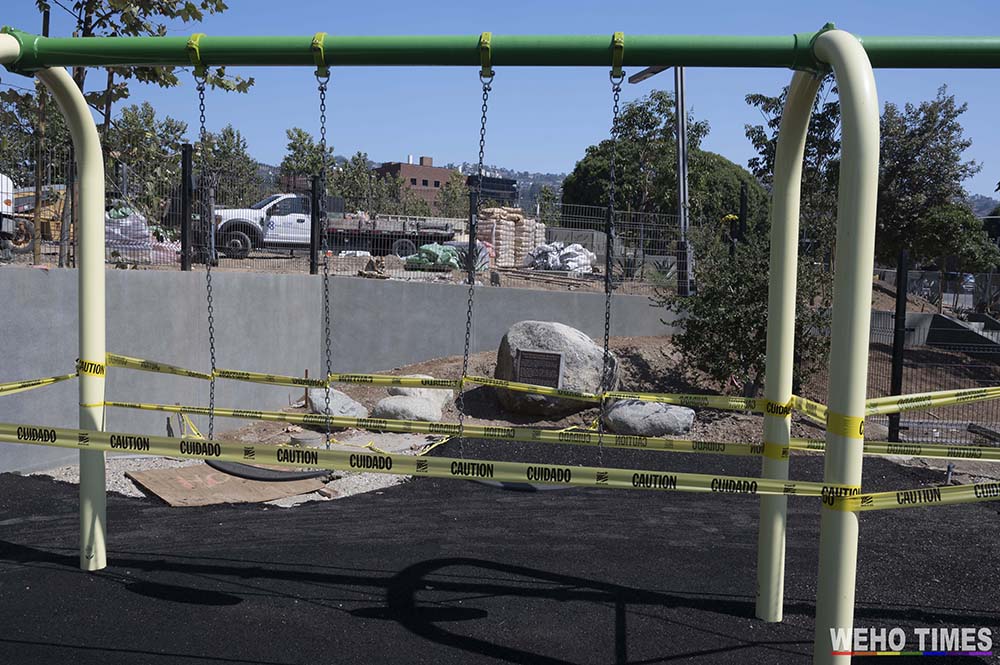 The brass plaque reads as follows:

This playground celebrates the life and joy of David Reed Gamboa Brandhorst who was lost with his parents Daniel Brandhorst and Ronald Gamboa on September 11, 2001.

David’s boundless energy and love were a gift to his Papa and Daddy and all those who knew him. David loved to play at this park – a little boy racing to climb and swing under the watchful eyes of his Papa and Daddy.

May David’s playground always be a place of joy, laughter and safe haven for every little boy and girl who asks for just one more trip down the big slide – or as David would say, ;Just five more minutes, Daddy.'” 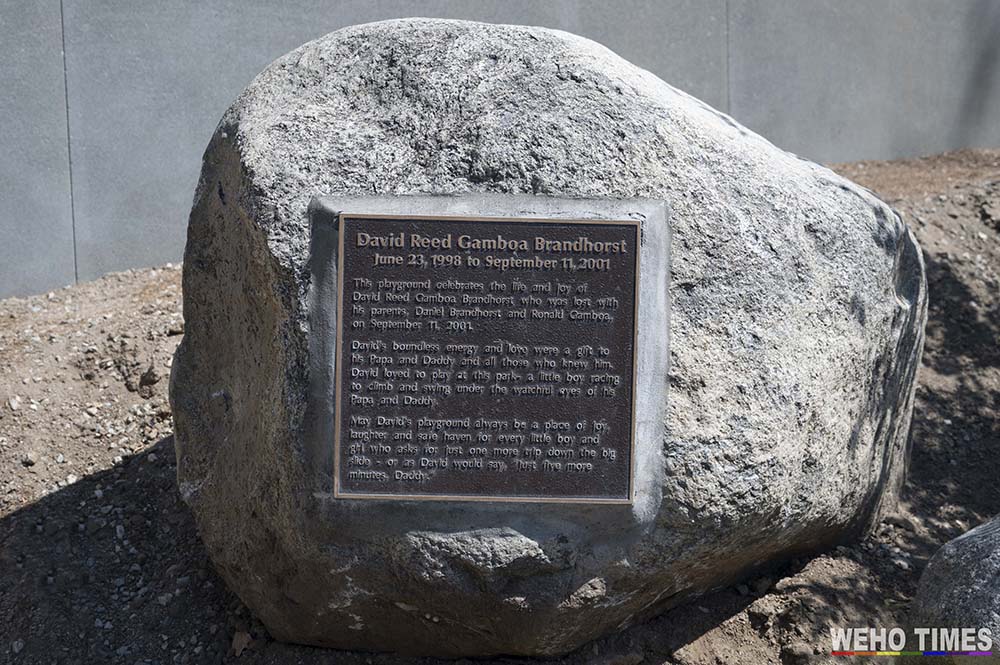 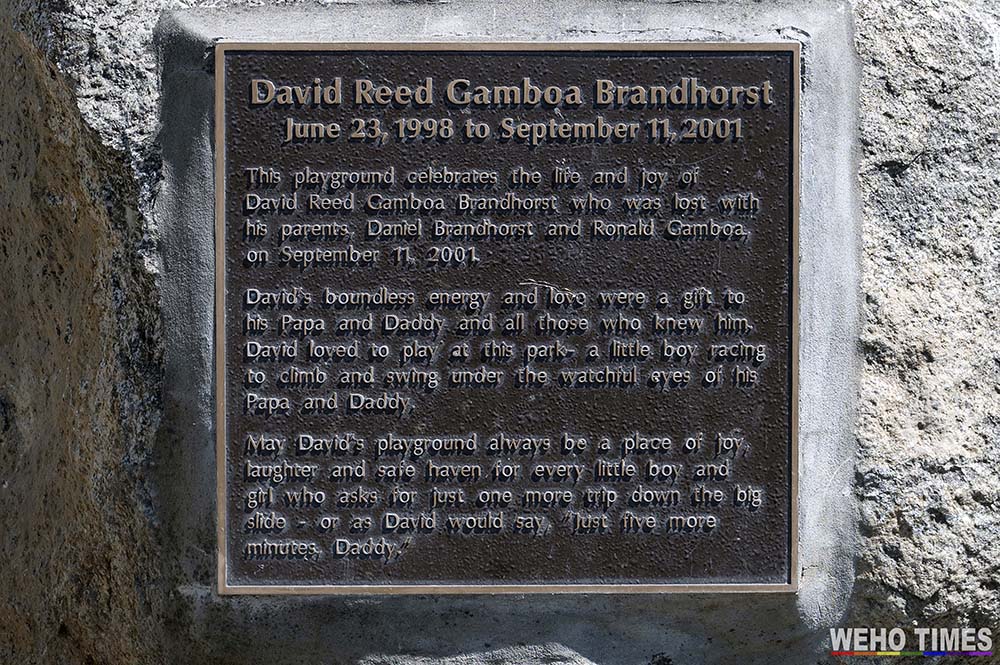 The 9/11 Memorial states that Mr. Brandhorst, 41, was an accountant for PricewaterhouseCoopers in Los Angeles and Mr. Gamboa, 33, was the manager of a Gap store in Santa Monica. David, who was named for Daniel’s brother, was adopted in 1998. Mr. Brandhorst and Mr. Gamboa had been introduced at a party 13 years earlier.

At age 3, David Reed Gamboa Brandhorst loved Legos, his cousins and attending his weekly swim class. On Sept. 11, he boarded flight 175 at Logan Airport with his fathers Daniel Brandhorst and Ronald Gamboa to return home to Los Angeles after visiting family in Cape Cod. The hijacked flight crashed into the south tower, making David one of the youngest victims of the 2001 terror attacks.

Gamboa’s sister, Jeannie Merwin, remembers her nephew as a gentle and loving little boy. Following the example of his health-conscious father, she says he loved vegetables. He even opted to eat cherry tomatoes over cake and ice cream at a cousin’s birthday party.

David called Gamboa “daddy” and Brandhorst “papa.” His fathers had met at a party in 1987 and a few years later relocated from the East Coast to Los Angeles. They decided to start a family after being together for 10 years. They were in the delivery room when their adopted son, David, was born—just one day after Brandhorst’s birthday.

The two men relished fatherhood and both doted on their son. Family members say they had plans to adopt more children. The two were also founding members of the Pop Luck Club, an organization designed to give support and resources to gay dads and their families.

David’s name is adjacent to his two fathers at the 911 Memorial on the South Pool: Panel S-4.

Just heartbreaking. The loss of this family and everyone on that horrific day. It’s a very loving tribute to youth and innocence ….and I’m glad the city did the right thing and put it back.