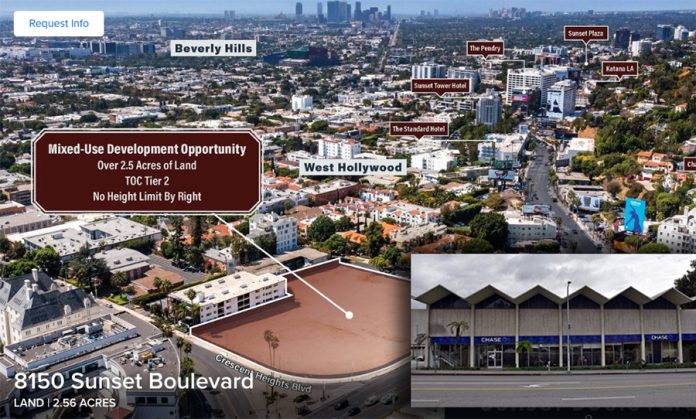 It appears the 8150 Sunset Blvd Project is a bust. The lot located on the corner of Sunset Boulevard and Crescent Heights is back on the market. A listing for the land that was once home to The Garden of Allah and the recently destroyed Lytton Savings Bank Building is appearing in multiple websites advertising the sale of the 2.5-acre property.

Townscapes Partners secured approvals in 2016 for a pair of mid-rise buildings featuring up to 203 residential units above 57,300 square feet of retail space designed by Frank Gehry, the architect who created the Walt Disney Concert Hall in downtown Los Angeles. The completion of the new construction was set for some time in 2023. Townscapes currently has a page with the renderings of the 8150 Sunset Blvd Project on their website, but the link to the actual project has been removed and redirects to a dead Bluehost link.

They demolished the historical Chase Bank / Lytton Savings Bank on April, 2021, and it appears they are not follow through with the project.

Although technically in the city of Los Angeles, the building known for its folded zigzag plate rooftop was embraced by many WeHo residents as a historical landmark.

In June 13, 2018, a decision by the Supreme Court of California to deny hearing a petition filed by the Los Angeles Conservancy effectively ended all legal efforts to stop the needless demolition.

In late 2020 a revised plan for the redevelopment of this site was unveiled, which still called for the scrapping the building.

The Los Angeles Conservancy describes the now gone Lytton Savings Bank building as a striking departure from traditional bank design when it opened in 1960 with its dramatic, folded plate concrete roof and glass-walled banking floor.

“As financial institutions nationwide analyzed the need for progressive banking methods following World War II, architects responded by radically reinventing the bank’s form, reads a post on their website. “Lytton Savings (as part of larger Lytton Center) typified these national postwar banking trends through its modern architectural design, transparency, and integrated art component, and is one of Los Angeles’ earliest remaining examples of this transformative shift in postwar-era bank design.”

The Lytton Savings and larger Lytton Center occupied the former site of the Garden of Allah. The storied Hollywood inn with surrounding villas was purchased by Lytton in 1959. The Garden was razed to make way for the bank and the bank was demolished to make way to an empty lot we see now.

Townscape is known for bait and switch. They had multiple iterations of projects for this land, but within the development community, it was well know they never planned to build anything here. They wanted to clear the land and sell.

Thank you for updating us on this fiasco

Disgusting. Townscape is getting what they deserve for ignoring the community’ concerns. Karma. Sad the bank is forever gone though.

We have an annotated overview photo of the Garden of Allah Hotel here that shows how the lot looked in the early ’30s. https://www.westhollywoodhistory.org/galleries/the-garden-of-allah/4-continual-tumult/central-holding/

LA- and the state of CA- have made it so easy to tear down unique architecture and history without mandating anything in return. Developers just constantly have their way, and now we’ll have TWO empty lots on prime real estate: Crescent Heights and Sunset to match the decade(?)-empty lot just down the street on CH and Santa Mo. Way to go, LA, way to go.

Fingers crossed for something wonderful to replace it!

Why would Gehry have to pay for anything. He was not the developer, he was the architect. Townscape used Gehry to give credibility, got the demo done and now will sell a shovel ready site for million and millions more the they paid. They were never going to build.

The Melrose Triangle hole-in-the-ground may be next.

Please someone tell that someone somewhere salvaged the brutalist stained glass wall from inside the bank.

There was more skill in that stained glass wall that in Gehry’s entire career.

This is very sad. So much arguing, anger and destruction for nothing.

Yes, I remember the big deal that was made when the project was announced.Frank Gehry was to be involved and you thought the new development was going to to be the Second Coming of Christ. There was the controversy over the Lytton Bank building over the span of a few years.The building was destroyed losing a Mid-Century landmark and now the project has stopped.Now you are going to have a big empty space where the homeless no doubt will take over. Before all the hoopla,there was a faceless strip mall with a McDonald’s and a El Pollo Loco.At least,the strip… Read more »

Arrogant, no-talent-having Frank Gehry strikes again. His toxic ego couldn’t share a piece of property with another architect’s work. At least we won’t have to look at another of his patented trash tornados.

ABOUT US
WEHO TIMES West Hollywood News, Nightlife and Events. The WEHO TIMES is an online news source covering the life and times of the City of West Hollywood. Featuring unbiased professional reporting and photo journalism, WEHO TIMES is updated daily, delivering the latest city news. The online publication founded in 2017, also features cultural events, people, politics, places, nightlife, and the history that make the City of West Hollywood the unique, creative city we all know and love.
Contact us: editor@wehotimes.com
FOLLOW US
© 2023 Murillo Media, LLC
wpDiscuz
16
0
Would love your thoughts, please comment.x
Comment Author Info
Report this comment