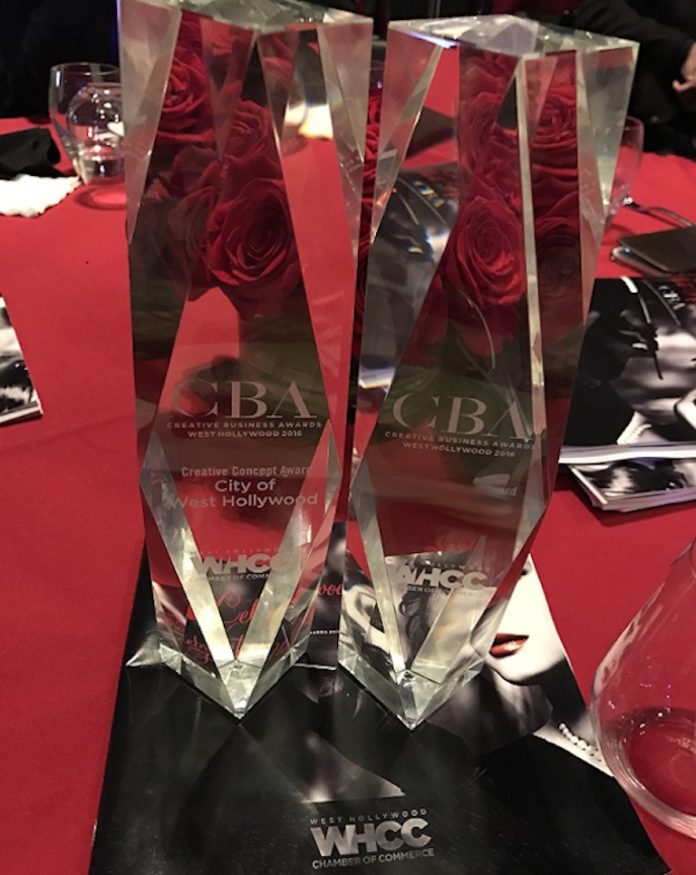 The festivities began at 6:00 PM with a reception and silent auction sponsored by Beverly Center which raised over $24,000 from over $70,000 in valued products and services from local Weho business.

Sponsored by Cedars Sinai, Wells Fargo and Capitol Drugs, this gala is the West Hollywood Chamber’s most prestigious and longest-running event, now in its 34th year which helps to raise money for its 501c6 nonprofit business association. Each year the Chamber celebrates businesses that have shown innovation and creativity in their business model.

But the biggest winners of the night were Alan Johnson and William Karpiak of Ramada Plaza West Hollywood pictured above (with West Hollywood City Manager Paul Arevalo) who received Lifetime Achievement Awards for their incredible contributions to West Hollywood and its hospitality industry for the past 35 years.

Each year the Chamber celebrates businesses that have shown innovation and creativity in their business model.

Twenty-one (21) nominees in seven (7) categories were celebrated at the event, chosen for their innovative approach to business and/or creative merits in product and service by the WHCC Membership, its Board of Directors and the Special Events Committee. The criterion for selection was that the business is a WHCC Member and have made significant contributions to the West Hollywood business community. Members vote for their favorite nominees via an online ballot and the winners are announced at the event.

Here are the Winners of this year’s West Hollywood Creative Business Awards 2017:

Lifetime Achievement Awards presented to Alan Johnson and William Karpiak of Ramada Plaza West Hollywood for their incredible contributions to West Hollywood and its hospitality industry over the past 35 years.

Corporate Innovation (awarded to a business that has shown creative innovation in their corporate business model), Faring.

John Chase Art & Design Award (awarded to a business that falls into the categories of art, performance art, fashion, design, architecture or any other creative arts realm) Jon Viscott Photography.

WeHo Attraction Award (awarded to a business that attracts visitors to West Hollywood or caters to the visitor and tourism market) Catch LA.

Creative Community Service (awarded to a business or individual who has shown exemplary service to the community philanthropically, or as a volunteer, an ambassador, a non-profit or a representative of government) Café D’Etoile.

The Creative Business Awards (CBA) is the most important fundraiser for WHCC, a 501c6 non- profit organization. This year’s event raised a net profit of $52,500 for the Chamber. Funds raised from this event help to contribute to programming and promotions for the business community.

More About the WHCC