“After many years of serving the community, we are sorry to say that we have not been able to come to lease renewal terms with our landlord and will have to permanently close our West Hollywood club on Tuesday, November 30, at 9 p.m.” reads a Facebook post on the 24-Hour Fitness Super Sport West Hollywood location.

“Memberships will be automatically transferred to our Santa Monica Super-Sport club, located less than 8 miles away at 2929 31st in Santa Monica. Members, right now, you also have access to every 24 Hour Fitness location. We look forward to continuing to support you in your journey.” 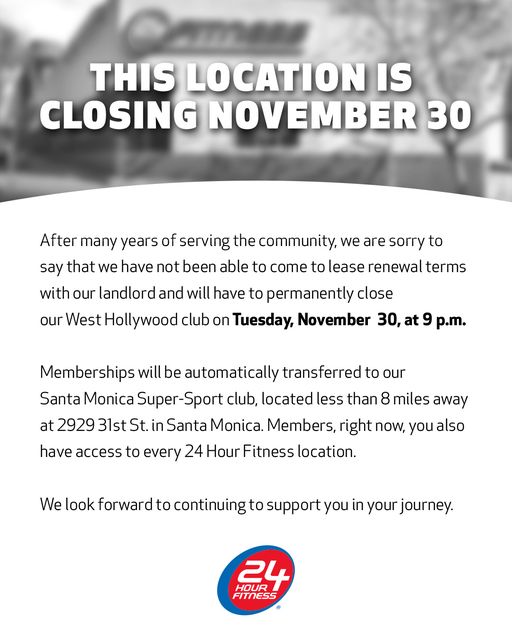 A message on the gym’s main website confirms the closure.

24-Hour Fitness took over the what used to be the West Hollywood Bally’s Sports Connection on November 1, 1996, and turned it into a Super Sport. Members of the WeHo location were grandfathered in to the Super Sport gym or given the option to make a different Super Sport location their home gym.

The 24-Hour Fitness Super Sport in Hollywood known as the Arclight location also officially closed permanently this past December 2020 with little to no fanfare.

“After many years of serving the community, we are sorry to say that we were unable to reach an agreement with our landlord and have had to permanently close our Hollywood club,” reads a similar sounding notice sent to the home members of that gym. “This is not the news we were hoping for, but we remain committed to continuing to serve you with access to any reopened 24 Hour Fitness club near you, including our new Outdoors@24 locations.”

It is not yet clear what is happening to the West Hollywood local gym. There are rumors that a John Reed gym will move to that space, however, we have not been able to confirm this rumor.

We can confirm that a new private luxury fitness club is launching just a stone throw away from the City of West Hollywood with an affiliation to John Reed Fitness. A new fitness club called Heimat is slated to open on the southeast corner of La Brea Avenue and Romaine Avenue later this year, at the WeHo boundary. The new global flagship location by fitness leader RSG Group, promises to bring what it is calling an “exclusive yet inclusive” modern, sophisticated, and luxurious take on day-to-night fitness, offering a holistic, wellness, culinary, and cultural concept (RSG operates around 900 gyms on six continents, including its first nightclub-themed gym John Reed Fitness in downtown Los Angeles).

The closing of the 24-Hour Fitness Super Sport West Hollywood Gym is truly the end of an era for the local WeHo community. The likelihood that members will drive 8 miles to Santa Monica when they used to walk to their local gym, is not very likely.

Have had my 24 hour membership for years and it was a great deal. But they closed the Hollywood location and also the West LA locations a while ago. With West Hollywood (my favorite location) being shut down, I guess that’s it for me.

I love the weho location and ever since they shut the DTLA location I didn’t mind communiting to weho. The vibe there and the classes was always legit. With more 24s closing the remaining locations are getting more crowded and ran through. There’s no way I’m going to the Santa Monica on a regular basis and I’m really bummed that I’ll have to cancel my membership after 11 years.
It’s the worse when you see that a greedy landlord is the reason behind the closure.

Let me get this right. “Couldn’t come to an agreement with the landlord“?? Does this mean that another greedy fucking landlord is out to jack up the rents and the business can’t pay it without charging their members $130 a month like the replacement gym that is “high end” wants to do?? Where are the middle class and the working class supposed to work out if there are only “high end“ gyms in West Hollywood anymore? The people of the city of West Hollywood need to rise up and protest the constant rape of our economic existence for anyone other… Read more »

Or 24 Hour Fitness wanted a discount on renewing the lease, as they are losing money. We will probably never know the truth. I have been a member of 24 Hour for many years and paid very little, so any option now will be significantly higher.