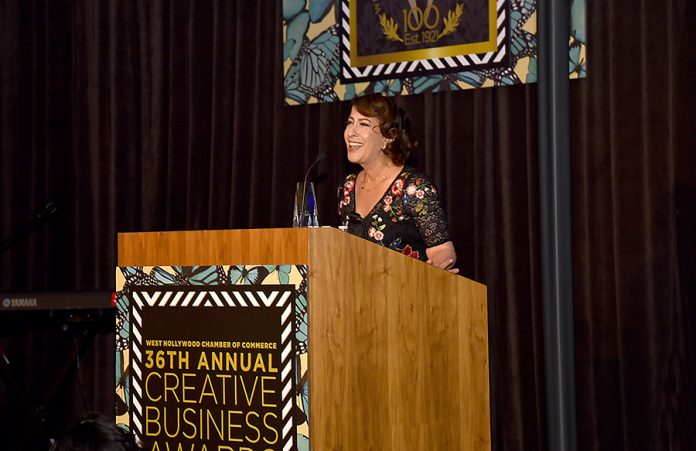 Jamie Adler, the president and brand director of Phyllis Morris Originals and Circa Wallcovering, was the recipient of the West Hollywood Chamber of Commerce’s 2019 Legacy Award at the Chamber’s 36th Annual Creative Business Awards ceremony, which took place on Thursday, November 21, at the 1 Hotel in West Hollywood.

Jamie Adler has worked in and been involved with the City of West Hollywood for three decades. She has been a part of Phyllis Morris Originals, a company founded in West Hollywood, by her mother Phyllis Morris, in 1958. Adler was a founding board member of the West Hollywood Design District and for more than a decade has served on the board of Visit West Hollywood, a destination marketing organization for the City. She oversees all aspects of Phyllis Morris, from image, to branding, to licensing. Her mother launched the company with the iconic Poodle Lamp, which began the company’s six-decade success. The Poodle Lamp and other iconic designs from the company’s archives have been licensed and reproduced by Currey & Company. In 2008 Jamie created Circa Wallcovering, a boutique wallpaper collection inspired by her late mother’s style and sense of drama. The 12,000 square foot showroom is located on Robertson in the heart of the West Hollywood Design District will be part of the Robertson Lane Hotel, in development and scheduled to open in 2021.

A highlight at this year’s Creative Business Awards was the Chamber’s “21 Questions with Jamie Adler,” a video taken in her home, which was shown prior to presenting Adler with her legacy award. The format of quick-fire questions in a single shot is a play on Vogue’s “73 Questions with Your Favorite Celebrities” video blogs.

Adler answer questions on the fly. In the 21 questions, she talks about her earliest memories in West Hollywood, WeHo’s best kept secret and she was asked to choose her favorite John from the West Hollywood City Council.