2022 WeHo Halloween Carnaval was Cancelled – Next Year, ‘Not Recommended’ 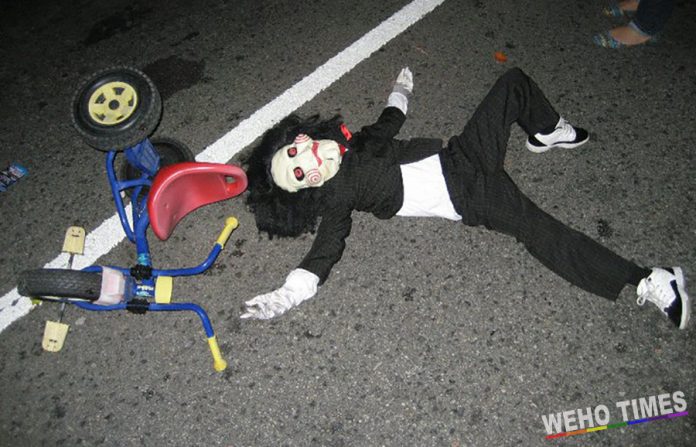 It’s true, the 2022 WeHo Halloween Carnaval has been cancelled. “The City of West Hollywood is reminding the community and the region that the City’s annual Halloween Carnaval has been cancelled for 2022 in accordance with protecting health and safety during the City’s response to the COVID-19 pandemic,” reads a statement on the West Hollywood’s community events page.”

The cancellation of the 2022 WeHo Carnaval dates back to the approval of the budget at the regular West Hollywood City Council meeting on June 27, 2022. Attachment C listing the FY 2022-23 Budgeted Special Events (revised 6/27/2022 per Council Action) has the event which began in 1987, as cancelled for the October budget. According to that same budget, the event is currently listed as “not recommended in 2023.”

The cancellation of the event was overlooked at the Monday, June 27, 2022 city council meeting when the West Hollywood City Council discussed a range of topics, including changes related to community safety programs which increased Block by Block (BBB) security ambassadors by 30 positions to perform foot patrols in residential neighborhoods, added one Los Angeles County Sheriff’s Department (LASD) Deputy assigned to the Entertainment Policing Team, and decrease the number of LASD Deputies by two.

For two years now, the city’s Halloween Carnaval has been canceled due to the COVID-19 pandemic. The 2022 WeHo Halloween Carnaval was cancelled when people are still testing positive for COVID-19 and there is an alarming rise in monkeypox infections throughout Los Angeles County.

“We canceled it two years in a row,” council member John D’Amico told the Los Angeles Magazine. “So it sort of doesn’t exist anymore, in some way. Many of us experienced, in some way, a kind of a sense of relief. As much fun as it was, it was an incredibly nerve-wracking 24 hours to make happen.

We used to be on an open stage, give out awards, celebrities would come, but by the end, it was this very discreet thing with a DJ booth,” he said. “So shaking it off and seeing what organically grows is where we landed.”

Public in-person events like LA Pride and National Night Out were hosted by the City of West Hollywood this year.

Other events on the chopping block are the WORLD AIDS Day and currently the Sober New Year’s Eve event #BOOM for 2022 is “not planned for FY22.”

As background, the City of West Hollywood’s Halloween Carnaval was launched in 1987 and is rooted in the foundation of the City’s diverse culture and community. The event has grown year-by-year into an annual gathering of phenomenal costumes, entertainment, culture, and self-expression with a myriad of observers, revelers, exhibitionists, and performers.

At this time, the City of West Hollywood remains in a declared local emergency in response to the coronavirus (COVID-19) pandemic and is focused on efforts to protect public health and safety.

They don’t want to say this on the record, but they’re worried about some sort of incident/homophobic attack, not COVID. It’s just not worth the risk in this heated climate we’re currently navigating. Don’t cry because it’s over, be glad that it happened.

Whoa, I was surprised the sober new year’s event,Boom was cancelled.Any chance you can have to celebrate New Year’s Eve sober is wonderful for someone who is trying to not drink during a holiday that encourages it.

I think the city is making a mistake not doing this event.I don’t know how much it costs,but it can’t be that expensive.Too bad.Maybe if enough people point this out,it can be reinstated.

The Halloween Carnival was fun while it lasted,but it has become a hard to control beast.The original intentions was fine,but the crowds got larger every year with more attractions added.

If the city doesn’t want to deal with a large carnival,there is nothing to stop the various bar and restaurant owners to put on their own events.David Cooley,I am sure,will be planning something for that night.

I have seen a lot of comments on here about the disruption the carnival brings to their neighborhood,so I bet homeowners are happy about this.

It’s all about control, vote them out if you want your life back. They wasted 3 years of our lives, how many 3 years so you have left. It’s time to live freely and not be controlled by this madness.

Last edited 5 months ago by Stop the Madness
5
Reply

What a bunch of BS. It sounds to me like they are trying to phase out completely! Hopefully we can stop the stupid city council.

Guys I’m so scared of Covid I haven’t left my house since 2020. The thought of catching it outdoors, alone, while I’m taking my dog out scares me to no other. How have you left your house? My Prius needs an oil change but the thought of it giving me Covid scares me too much to take it in. Please let me know if someone can help me. Covid is the scariest thing on earth and plexiglass and masks seem to not work. What do we do??!!!

Are you serious? Why would your car need an oil change if you don’t drive it?

Dude, are you serious, very effective vaccines have been widely available for a years and the majority exposed have mild symptoms. However if you are immune compromised then wear your mask and don’t go the packed venues, your car dealership is not gonna be packed ‍♂️

This is total BS. They have had so many Pride events, Dodger Stadium is packed, Sofi Stadium Packed, etc. But we can’t have an outside Halloween event. Wow, so sad for everyone who loves Halloween, it is Gay Christmas. We have been robbed by dumb people. And I’m sure the area could have used the business as well.

Calm down, the bars/clubs will all do something. Plenty of people will be out celebrating, this is to discourage the growing number of out of area looky loos that just clogged up the streets. The past few before Covid were out of control security hazards, this just brings it back to its roots as a local celebration, all will be fine and you can still wear that feather crown and chaps

ABOUT US
WEHO TIMES West Hollywood News, Nightlife and Events. The WEHO TIMES is an online news source covering the life and times of the City of West Hollywood. Featuring unbiased professional reporting and photo journalism, WEHO TIMES is updated daily, delivering the latest city news. The online publication founded in 2017, also features cultural events, people, politics, places, nightlife, and the history that make the City of West Hollywood the unique, creative city we all know and love.
Contact us: editor@wehotimes.com
FOLLOW US
© 2023 Murillo Media, LLC
wpDiscuz
12
0
Would love your thoughts, please comment.x
Comment Author Info
Report this comment