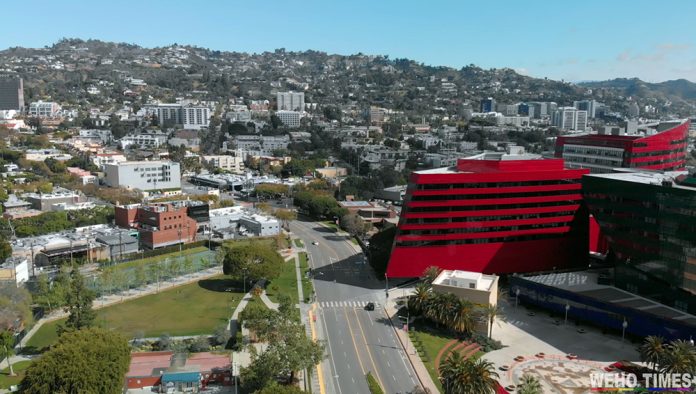 The United States Census Bureau will cease the Census count on September 30, 2020. As of September 15, the Census self-response rate is at a low 63 percent in the City of West Hollywood. The City is urging residents to “Be Counted West Hollywood” in the 2020 Census.

The response rate for households in the State of California is approximately 68 percent. The 63 percent only increased by just three percentage points since this time last month. This means that nearly four in 10 people in West Hollywood still have not taken the census. When broken down by tract, the numbers are in the low 60 percentile throughout the entire city with the exception of track 7003–the area between La Cienega Blvd., Sunset Boulevard, N. Harper Ave. and Waring Ave, which is at 68.3%. The lowest, is track 7005.01 at 60.7% at the Beverly Hills Gateway from N. Doheny Dr., to Sunset Boulevard down to Larrabee St, to Santa Monica Boulevard. 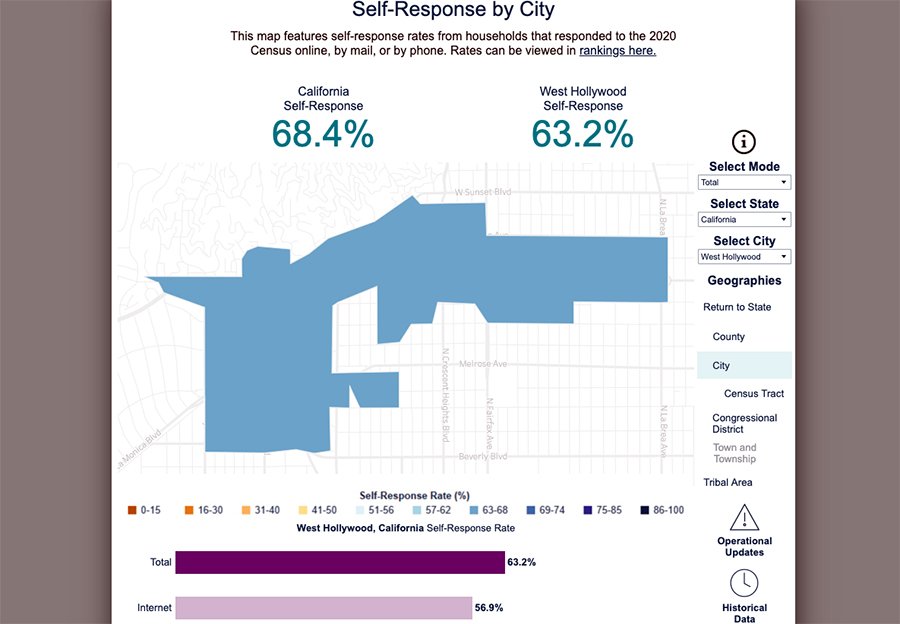 Community members who have not yet completed the Census can quickly and easily take the census in approximately five minutes online at https://census.ca.gov/. This simple survey is just nine-questions-long and Census responses shape determinations for vital funding for our community through the year 2030.

It’s also the law to complete the Census count. According to United States Code, Title 13 (Census), Chapter 7 (Offenses and Penalties), SubChapter II, if you’re over 18 and refuse to answer all or part of the census, you can be fined up to $100. If you give false answers, you’re subject to a fine of up to $500.

This year, for the first time, the Census form is available to complete online in 13 languages. Community members may also respond by phone in one of 13 languages, including by Telecommunication Device for the Deaf, at one of the phone numbers listed on the California Census 2020 website: https://census.ca.gov/2020/03/12/californians-receive-invitations-to-participate-in-2020-census/.

Community members who filled out Census forms in 2010 gave the federal government a roadmap for this very moment in time. That decade-old data is being put into action during the COVID-19 pandemic and has been used to distribute federal funding to Los Angeles County and much-needed economic relief for working families and small businesses. The City of West Hollywood is working to ensure that community members continue to be able to access important services such as care in health clinics, seniors programs, LGBTQ services, food programs, and assistance to people who are experiencing homelessness by encouraging participation in Census 2020. This year’s Census is also vitally important in reflecting the true diversity of our community at this time, especially for Black, Latinx, Asian, Pacific Islander, Indigenous and other communities of color. Census data will additionally be used to allocate funding for road maintenance and improvements, and public transit initiatives.

Census staffers are working in the field and are currently knocking on doors in the City of West Hollywood and in communities across the nation to follow up with households that have not yet responded to the Census; they are there to help. To learn more about how to identify a Census worker, visit: https://2020census.gov/en/census-takers.html. Census responses are safe and secure. Information collected as part of the 2020 Census cannot be shared with or by other governmental agencies, including ICE or any law enforcement agency.

The United States Constitution mandates that a complete national population count be conducted every 10 years. The 2020 Census will decide how billions of federal dollars are distributed in California. An undercount could impact funding for schools, health services, child care, emergency services and many other programs. The Census will also decide the number of California’s Congressional members and Electoral College votes. A complete count means more people in power who truly represent and advocate for local communities.

The nonpartisan Legislative Analyst’s Office (LAO) in California has estimated that during the 1990 Census, California’s population was undercounted by 2.7 percent; this undercount likely resulted in California receiving at least $2 billion less in federal funds. There are, however, other impacts beyond reduced financial resources: according to the LAO, the 1990 Census undercount was severe enough that the State of California was shortchanged one Congressional seat. Census staff has projected, based on data from the 2010 Census and from regular surveys, that certain West Hollywood census tracts may have a moderately low response rate. As a community of just 1.9 square miles, the City of West Hollywood is working diligently to achieve a complete census count in Census 2020.

The City of West Hollywood has consistently supported legislation that requires the Census Bureau to count every person living in the United States, independent of their immigration or citizenship status and the City has strongly advocated for the importance of including questions about sexual orientation in order to help identify LGBTQ people and families and safeguard their rights and responsibilities.