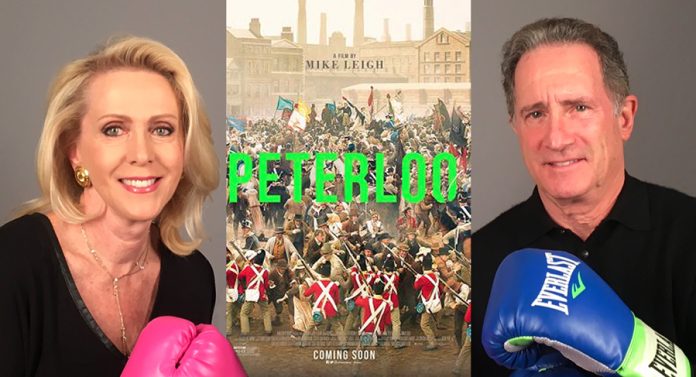 Let’s go to the movies with Jeanne and David Kaplan of Kaplan vs Kaplan. This is their latest his and her movie reviews of the movie Peterloo, by Mike Leigh, starring Maxine Peake and Nico Mirallegro.

Jeanne: I have been a devoted fan of Mike Leigh, who wrote and directed PETERLOO, since SECRETS AND LIES (1996), a few years before David and I started writing as film critics. After that, he wrote and directed several others I loved, including VERA DRAKE (2004), HAPPY-GO-LUCKY — with the amazing Sally Hawkins (2008) and MR. TURNER — a brilliant period piece (2014). Sadly, PETERLOO does not qualify as one of his best — and I so appreciate a good historical film.

PETERLOO recounts the horrific massacre of innocent, unarmed protesters at St. Peter’s Field,Manchester, England on August 16, 1819. A crowd of around 60,000 assembles peacefully to demand parliamentary representation reformation. The economic situation in England was especially dire following the end of the Napoleonic Wars in 1815.

Leigh builds his story around several families in Manchester, particularly one involving Joseph (David Moorst), a young army bugle player from the battlefield of Waterloo. When he arrives home to the shock of his mother, Nellie (Maxine Peake), the rest of his family, including his father, Joshua (Pearce Quigley), his brother, Robert (Tom Meredith), his sister, Mary (Dorothy Duffy) and Robert’s wife, Esther (Simona Bitmate), rally around him in support.

But a bigger presence is making himself known in the areas in and around London. Henry Hunt (Rory Kinnear), a well-known orator, has agreed to travel to Manchester to address a public meeting. Word spreads that Hunt will be speaking, and consequently thousands from Manchester and many miles around vow to attend — peacefully and wearing their Sunday best.

Hunt demands that no weapons be anywhere near St. Peter’s Field, and it is so agreed. But the local magistrates have other ideas. Appalled that these commoners have the temerity to gather, they instruct the local Yeomanry and Hussars, both regiments of soldiers, to attack the crowd to make them disperse. What ensues is a bloody battle of armed soldiers versus unarmed civilians, many of them women and children.

As disgusting as all of this sounds, Leigh fails to completely reconstruct the horror of that day. Most importantly, I believe he tries to cover too much detail of the background as to what transpired and not enough personal development of specific characters. We know Joseph and his family, and yet we are not totally invested in them. Along with Henry Hunt, there are others who are peripherally significant to the cause, but not one of these characters is fleshed out enough for the audience to care.

I found myself becoming angry as the film progressed. There is much confusion as to who is — or is not — responsible for this unbelievably barbaric slaughter, and it is even worse when Leighabruptly ends the film. No explanation, information or resolution is provided in the closing credits. Honestly, I could have Googled the Peterloo Massacre on Wikipedia and gotten a more satisfactory summation. Don’t waste your time.

David: Veteran British director Mike Leigh does not boast a vast filmography of movies, but they all have a lot in common. (1) He writes virtually every script for each of his films, (2) they are all — with one exception — at least two hours in length and (3) they don’t make a ton of money. Four of my favorite Mike Leigh movies are VERA DRAKE, SECRETS AND LIES, MR. TURNER and HAPPY-GO-LUCKY. And now there is PETERLOO.

Despite its seemingly unwieldy running time, I found PETERLOO flows with surprising alacrity. First and foremost, Leigh peppers his movies with memorable characters. Their interactions and displays of emotion contribute mightily to his films’ enjoyment. PETERLOO is no exception.

This movie is based on a real event in British history, the Peterloo Massacre of 1819 — 200 years ago. Here Leigh generates true suspense and that aching feeling of dread when we think we know what’s coming — and that it likely won’t be pretty.

The townspeople of Manchester, England have grown sick and tired of their mistreatment and growing poverty at the hands of the British government. These folks, 60,000 strong, participate in a mass rally at St. Peter’s Field. They seek democratic rights, but the greedy and callous British magistrates consider this rally a riot in the making. Earlier when one of these despicable judges sentences a man to 14 years in prison for stealing a coat because he was cold, the depth of their cruelty is obvious.

The crowd arrives at St. Peter’s Field, some who marched for many miles. They have come to hear Henry Hunt (Rory Kinnear), a well-known speaker who preaches non-violence. He convinces the leaders of the rally to abandon their weapons — rifles, shovels, swords, et al. Meanwhile the magistrates are sequestered in a room overlooking the field — actually portrayed in the movie as the town square — debating whether to send in armed troops on horseback, known as Hussars, to disperse the people.

Leigh provides extreme close-ups of the townspeople, chattering happily, all smiles, as they anticipate Hunt’s address. But when things begin to unravel, Leigh’s camera leaves nothing to our imagination. The dread the viewer feels up to this point comes to fruition. The finale is a shocking testament to the disparity of power between the haves and the have-nots, although the townspeople manage to fight back to some degree.

Leigh and his Oscar-winning costume designer, Jacqueline Durran, along with many other talented and industry-recognized crew members, transport the viewer back in time to this very dark day in British history. And the excellent performances by the ensemble cast are impeccable.

My only complaint about PETERLOO is the lack of a final wrap-up to the event. Questions about the number of fatalities, what happened to Henry  Hunt, when did the people of Manchester achieve their goals, and so on — are not addressed. I expected the answers to be superimposed on the screen as in the style of documentaries.